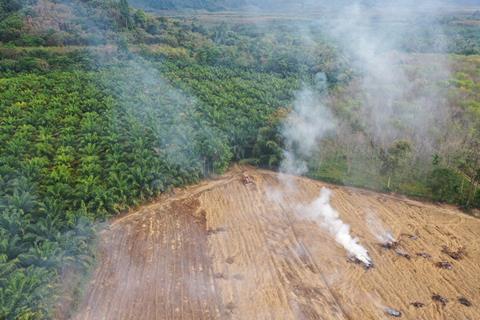 The John Lewis Partnership has been praised in this year’s WWF global scorecard for how companies use palm oil.

The group was named as one of the businesses leading the way on sustainable palm oil sourcing, scoring the highest place out of UK companies and achieving fourth globally in the rankings.

Waitrose’s parent company has jumped from the middle ranking to the top level in just a year.

According to the WWF’s 2021 Palm Oil Buyers Scorecard, the retailer showed progress in tackling the destruction of forests and other habitats caused by unsustainable palm oil production.

“We are delighted to be recognised as one of the businesses leading the way on this hugely important issue,” said raw material sourcing manager at the John Lewis Partnership, Sam Lee-Gammage.

“Palm oil can and must be produced sustainably and this is critical to stopping further tropical deforestation as well as to supporting sustainable development in the communities and landscape where it is produced – an issue that will deservedly be at the top of the agenda at COP26.”

The John Lewis Partnership has been engaged in palm oil conservation work – including launching an initiative to support the Mului indigenous community in Borneo to protect their tropical forests, as well as advocating for due diligence legislation for forest risk commodities both in the UK and the EU.

“This is just part of the solution, however, and this is why we are actively working with organisations like WWF, the RSPO, and other businesses to help transform the wider industry, and make sustainable palm oil the norm,” Lee-Gammage added.

The Co-op and Tesco came second for best performing UK businesses, with the scorecard showing the retailers were “well on the path” to sustainable palm oil sourcing.

However, the WWF has warned that many major brands are still “failing to truly clean up their act on palm oil”.

The organisation said most companies failed to ensure the palm oil they sourced was not linked to deforestation, environmental wrongdoing and human rights abuses.

“A few companies have made impressive strides to eliminate unsustainable palm oil from their businesses to protect nature. They have shown their competitors that it can be done,” said executive director of advocacy and campaigns at WWF, Katie White.

“However, despite many global brands making long-standing commitments to eliminate the destruction of nature from their palm oil supply chains by 2020, the vast majority are still not acting on their promises.

“We won’t forget the companies that don’t step up – with so much at stake, there is no room for inaction or half measures.”

This year’s report found that half of respondent firms were still not sourcing 100% RSPO certified sustainable palm oil.

On the other hand, over half of the companies were actively taking part in sustainability platforms such as the Palm Oil Transparency Coalition and the CGF Forest Positive Coalition.

“After a decade of inaction by many, this is a positive shift that all companies should adopt as quickly as possible,” the WWF said.