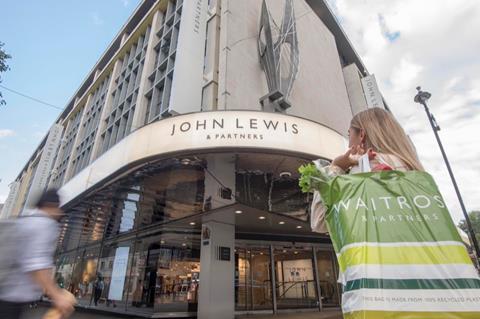 The John Lewis Partnership has decided to stop reporting its weekly sales figures for John Lewis and Waitrose, as the group readies itself to start operating under a new management board structure from next week.

The business said it would now only publish details on its financial performance every six months, in its half-year and full-year results.

Sales and profits will also no longer be broken down between John Lewis and Waitrose as a result of the new Future Partnership strategy, which sees both brands managed as one under the leadership of incoming chairman Sharon White.

JLP said it would include figures in trading updates split by three categories: general merchandise, grocery and services.

The group will publish details of the 2019/20 financial year – which ended on 26 January – in March as normal, but will provide no further updates until the 2020/21 half-year results in September.

JLP has published weekly update on its website for the past 10 years, giving a breakdown of how the department store and the supermarket chain performed compared with the previous two years.

The announcment follows a difficult Christmas for the group, with the partnership bonus in doubt for the first time since the 1950s after profitability sank on a weak performance at John Lewis.

It comes ahead of White formally taking over from Charlie Mayfield on 3 February, and John Lewis and Waitrose combining management under a newly formed board.

“The Future Partnership strategy means we are now operating as one business and are therefore moving to a new financial reporting structure,” the JLP announcement said.

“We will, however, continue to disclose information on our trading through the publication of our full and half-year results and our annual report and accounts.”

City analysts, who have used the data as a gauge of the health of the retail sector in general, reacted with disappointed.

Retail analyst Nick Bubb said: “The decision to stop the John Lewis and Waitrose weekly trading updates will leave a big hole in our life and the best that can be said about the news is that if it represents a shift away from JLP being a top-line focused organisation to being more bottom-line focused, then it will enhance partnership bonus prospects.”

Howard Archer, chief economic adviser for the EY Item Club, tweeted: “Shame – have been times when seeing the weekly #JohnLewis sales data has been very useful in trying to gauge the state of #retail sales & #consumer spending.”

The final JLP weekly update, for the week ended 25 January 2020, the final week of the financial year, saw group sales fall 1.9% to £194.7m compared with the same week a year earlier.

Waitrose sales were down 1.6%, with a decrease in ambient, chilled, fresh, frozen and general merchandise. And John Lewis sales also fell 2.5%, with fashion, electricals and technology rising but a big 9.3% drop in the home department.