Waitrose proves there is no such thing as a free coffee 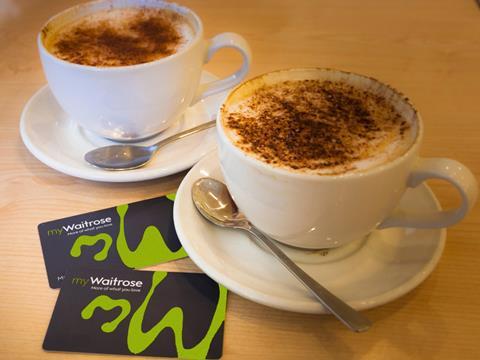 Bitter taste? Waitrose is risking the ire of the one million shoppers who enjoy a free cup of coffee every week in its stores

This must be a difficult time to be a Waitrose partner. As profits fall, it’s in a vicious spiral: sales are being propped up by inflation… which is leading to lower volumes… and in turn lower profits… and higher prices…

Meanwhile, availability continues to be shocking, partly the result of range proliferation and a flawed desire to please all the people all the time, but also driven, one suspects, by a desire to keep waste down as volumes continue to fall.

Oh, and having exited the space race, new retail-based innovations in its existing stores designed to reinvigorate the core - such as wine bars and supper clubs - aren’t working. Even the case for sushi bars is questionable. Does it deliver much in the way of profit or footfall?

Recently it’s been cutting a few costs, unpicking its Pick Your Own Offers initiative, for example, replacing it with a much cheaper and more primitive solution: vouchers, which it issues on your favourite items - but only when it feels like it.

Now it’s risking the ire of the one million Waitrose shoppers who enjoy a free cup of coffee every week - by insisting they can only do so if they bring their own cup.

Free coffee was an idea based around ‘the Power of Free’, a behavioural economics concept that said that customers would be happy to pay a massive premium on Waitrose 1 and other own label products (even where rivals were selling exactly the same crop from exactly the same field for a far lower price) so long as you gave them a free coffee and a newspaper with a notional value that was quite high, but which Waitrose could source for peanuts.

Trouble is, it was too powerful, especially in its original implementation, in which it was literally giving away free coffee to anyone prepared to walk in its shop.

But even after tweaking the model, so you could only have that coffee after your shop, it’s still appreciated by a million loyal shoppers.

Of course, it’s insisting this is an initiative to save the planet, and not at all a way of saving money. And certainly it will cut down on the number of shoppers who partake.

But most shoppers will just see it as a convenient excuse to backtrack. Rather than buying into any environmental aspirations, these core customers will more likely feel their intelligence has been insulted.

True, Waitrose has launched other environmental initiatives around plastic packaging, but even here they are nothing like as bold or arresting as the one outlined by Iceland.

Now, with Iceland announcing plans this week to eradicate palm oil from all its own label products, Waitrose has been outmanoeuvred once again. Mind you, it’s not the only values-based retailer that Iceland is showing up right now.

Oh, and one more thought. How will Waitrose manage these free cups of coffee? If you bring your own cup in, will you still have to show your receipt at the information desk? Or can you just come in off the street, like the eco-warrior you are, and help yourself?

That’s the trouble with the Power of Free. Customers are so clever, some of them will always find a way to milk it. And it probably won’t be the right ones.