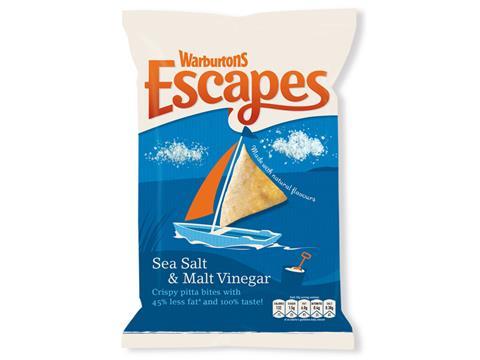 Warburtons has axed its bagged snacks range a year after rebranding it as Escapes.

The family-owned baker said it had decided to stop making the pitta-based products, but did not rule out a comeback.

“We will take the valuable insights and knowledge gained through our time in the challenging snacks market to investigate if and how we can develop a business to succeed in the long term,” said a Warburtons spokeswoman.

Originally launching as SnackaDoodle and Chippidy DooDaa in February 2010, the snack was beset with problems from the outset: a factory fire halted production just a few months after the initial launch. And, after bringing the snacks back with a simpler pack design under new name Baked Pitta Chips, the range was renamed for a second time last March as Warburtons Escapes and re-positioned to target health-conscious women. The fat content was reduced and packs redesigned to show colourful travel scenes.

The new-look range gained listings across the big four, but failed to deliver the sales hoped for in the highly promotional snacks market.

The failure of the range contrasts with the success of some of Warburtons’ other brand extensions. Sales of sandwich alternatives, for example, increased by £20.8m in 2013 and were a key driver behind the brand’s 6.8% growth during the year. [Nielsen 52 w/e 4 January 2014].