The CMA is to blame for P&H's demise

After an unprecedented year in grocery, we have just witnessed an incredible week. November saw CMA approval of the Tesco-Booker merger, Nisa agreeing to sell to the Co-op, Booths up for sale and the collapse of P&H. The latter is a tragedy for P&H employees - many also held shares, and the pension scheme is reportedly underfunded. The thoughts of the sector are with them.

The immediate and unseemly rush by the CMA to deny any liability for the collapse underlines that even it knows the opposite is true. It was incompetent to focus its analysis on one named player in a sector rather than the market and in doing so it put P&H firmly in the spotlight. To then conclude that there was not a problem was a death sentence for P&H. 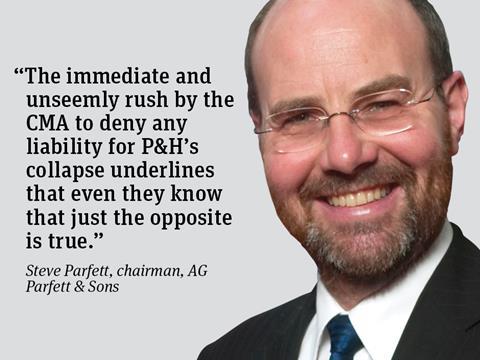 During all my career in this sector, failures have without fail come about due to cashflow issues and a loss of supplier confidence, most commonly involving the two major tobacco companies. The signals that the CMA sent the market in waving through Tesco-Booker were a trigger to every credit controller in the country that P&H was an unacceptable risk. Once that avalanche starts, no one can stop it. I am not denying that P&H had fundamental problems around low margins and the debt it had taken on, and its demise may have been a matter of time. However, the immediacy and timing are something for which the CMA is directly culpable.

Its inability to even consider the vertical market consequences of the merger, despite every wholesaler of consequence other than Booker telling it what they are, while sitting in a data room analysing scenarios in horizontal competition that both proponents and opponents said were not going to happen, demonstrates its gross incompetence. Its fear of Tesco’s hordes of lawyers and advisers, and its ability to speak directly to government at the highest level is also unlikely to have helped.

The Office for Budget Responsibility says we face low levels of growth not seen in our lifetime. The Grocer has highlighted the huge issues in grocery of Brexit - and hard Brexit in particular. The fragile pretence that there is a two-market scenario between wholesale and retail in grocery would be smashed beyond repair should Tesco-Booker go ahead.

Politicians now need to accept that the CMA is not competent to deal with this matter and its catastrophic consequences for the grocery market. Europe has competition regulators with teeth who do not fear even the biggest global companies. We need a genuine root-and-branch enquiry by a regulator with courage and competence, and in the meantime it must put Tesco-Booker on hold.