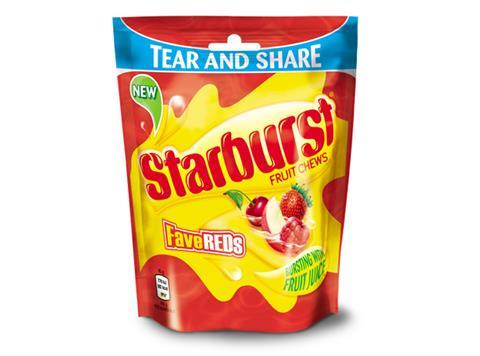 Starburst FaveReds are coming to the UK

Wrigley’s is adding two new Starburst SKUs to its line-up as it rolls out a new pack design.

The new Starburst FaveReds will be available as a 45g stick and 19g pouch, comprising strawberry, raspberry, cherry and red apple chews.

The move will be supported by Starburst’s multimillion-pound ‘Unexplainably Juicy’ marketing campaign, which launched on 28 January and features Michael Bolton serenading trees, along with in-store, outdoor, and online activity.

“Starburst FaveReds has delivered outstanding results in the US and is currently the second best-selling SKU in the Starburst range. We expect sales in the UK to replicate this achievement,” Wrigley confections business unit director Matt Austin said.