Life’s been kind to Coca-Cola Enterprises, says general manager Leendert den Hollander. Coke Life, that is. The stevia-sweetened cola has already raked in £14.6m since its launch last August.

“It’s one of the biggest soft drinks launches of the year,” says den Hollander. “It’s slightly ahead of expectations. Penetration is at 7.5% but what it’s really all about is repeat sales and they are at 28%, which is great. I’d expect that number to go up.”

Things aren’t so sweet for the portfolio as a whole, which has suffered a combined loss of £29.7m, the eighth greatest decline of the year. To add salt to the wounds, rival Pepsi (no9) has delivered the greatest gain in this year’s ranking, worth a whopping £31.4m.

Part of the problem is that many haven’t understood what Coke Zero actually is, suggests den Hollander, the former CEO of Young’s (no49), who took over the helm at CCE last May. “What I found striking is that if you talk about Coke Zero, five in 10 people don’t realise that it’s no sugar and no calories,” he says. “So there’s an opportunity there.”

With the sugar debate raging, confusion over the sugar content of Zero, which accounts for 7.6% of total Coke sales, will have hurt. CCE won’t say if similar confusion surrounds Life, which contains two thirds the sugar of red Coke, although it’s significant that in its first 12 weeks on shelf Nielsen data shows more drinkers switched from diet products than full sugar ones. The good news for Coke is that 21.9% of Life drinkers who switched to it from other colas in the first 12 weeks came from Pepsi Max. More surprisingly, 7% were new to cola. This suggests one of two things: Life has filled a genuine gap in the market or shoppers who don’t regularly buy cola were attracted by the novelty of a new, green Coke.

This month the brand unveiled a new strategy to more clearly communicate each variant and to ensure Life is seen as more than just a novelty. “We’re unifying Coke under one umbrella brand with four distinct variants,” says den Hollander of the move, which included a pack redesign. “Fundamentally what we’re saying is there’s a Coke for everyone and every occasion. So if you don’t like red Coke you can take one of the other three.”

You’d expect more drinkers to do just that, what with sugar continuing to get battered in the press and the final frames of all ads in the new Coke campaign featuring all four variants. But den Hollander insists that needn’t be to the detriment of red Coke, which with a value of £625.5m would be number three in our ranking if it were a brand in its own right. “There’ll always be people who enjoy red Coke,” he says. “We’ll see more of our portfolio move into low or no calorie Coke but we want to grow the total portfolio and there’s no reason why red Coke can’t grow too.”

Indeed, full sugar Pepsi is in growth, so why not Coke? 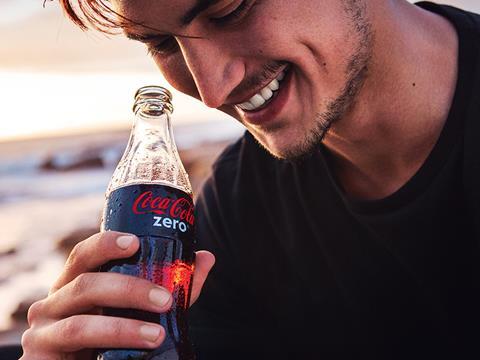