Alcopops, wines and fruit ciders to be hit by duty dilution law change 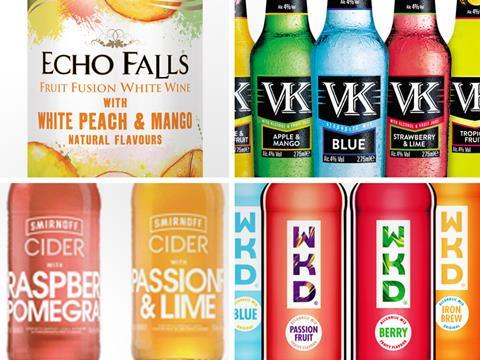 Increases in the cost of goods are on the cards for some of Britain’s biggest alcohol brands thanks to a change in the way duty is collected.

The Grocer previously revealed how the move to outlaw Post Duty Point Dilution - the act of paying duty before increasing the volume of a drink by diluting it - risked hiking prices of budget ‘British’ wine brands when it comes into force in April 2020.

Many wines sold under the £5 mark in the UK are made by importing grape must, which is fermented in the UK, meaning they are classified as ‘made wines’. That suppliers can pay duty on the alcohol before they are diluted means higher volumes can be produced at lower cost.

But the change could cause havoc for a wider group of suppliers than previously thought, including the UK’s biggest wine business Accolade Wines - which is understood to pay duty before dilution during production of its Echo Falls Fruit Fusions brand - and huge RTD brands such as VK and WKD.

Accolade declined to comment, but a senior industry source said: “They pay the duty on the alcohol when it’s at about 80%, so diluting it brings the whole cost of goods down really low.

“The whole model is based on it. If they wanted to maintain the same margin on Fruit Fusions they’d have to go up [from around £4.25/750ml] to £8 or £9. Which will never happen, no chance, because of the target market.”

Its closest competitor, Blossom Hill Spritz, will not be affected by the change as it is not made with duty dilution. It is not clear whether fellow ‘fusion’ brand Gallo Spritz is made with dilution, and Gallo was not available to comment at the time of going to press.

Many suppliers would be unable to swallow the costs, suggested a second source. “It is going to have a severe effect,” he said. “We’re talking an average 85p increase per bottle, which is very significant when you consider the price points these products are sold at. “If you then factor in additional increases that might be coming it could be over £1 a bottle.”

Broadland Wineries, which makes Three Mills, said it had begun cutting costs outsourcing its warehousing and distribution to “hedge against many types of potential downturns”.

The issue extends beyond wines and fruit wines. RTDs and fruit ciders, many of which are made with dilution, will also be hit. Steve Perez, chairman of VK owner Global Brands, said: “We’re obviously going to have to pass the cost on to retailers and consumers. This will make RTD products almost twice as expensive as cider, and over 20% more expensive than beer in terms of excise duty. This is totally unfair to a uniquely British industry - 95% of our products are produced right here in the UK, and we create thousands of jobs, especially in the north of England.”

Diageo’s Smirnoff Cider is also made this way, though it declined to comment. A spokesman for WKD owner SHS Drinks said while SHS “does not disclose details regarding recipes or formulations”, its products all “fully comply with current regulatory and legislative requirements” and it would “continue to meet all statutory obligations going forwards”.

Strongbow owner Heineken UK said its popular Dark Fruit cider would not be affected. A spokeswoman told The Grocer Heineken paid duty “in a fair and transparent way manner - on the abv that our customers receive”.

Making PDPD illegal risked putting the brakes on much of the recent innovation in the low and non-alcoholic sector, the second source said. Many of the latest low-alcoholic wine launches are made with dilution.

“It is very hard to take a natural product like wine and bring it down to a lower abv - whereas by [diluting] you can produce much lower alcohol products” the source said.

Perez added: “Perversely this will make higher abv products less expensive to buy than lower abv ones - surely the government should be doing the opposite.”