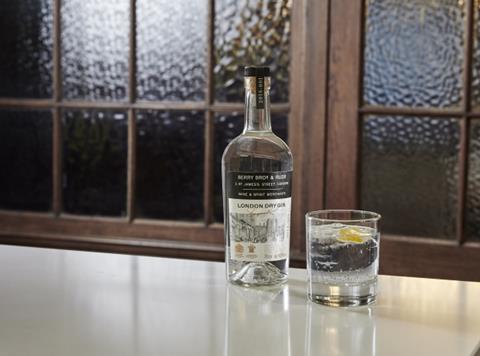 Berry Bros & Rudd is bringing back its own-label London Dry Gin after a four-year hiatus.

The tipples, which was sold from 1909 until 2014, when the wine and spirit merchant chose to focus on its other gins. It rolls out again this week through Berry Bros’ in-house distribution division Fields Morris & Verdin.

London Dry Gin is made for Berry Bros by Thames Distillers using liquid from the retailer’s oldest remaining bottle from the 1950s. It is flavoured with juniper, coriander, angelica root and winter savory, and has an abv of 40.6% (rsp: £25/70cl).

It had been a “fantastic challenge” to reproduce the gin from just a small sample, said Thames Distillers director Charles Macwell. “We are very pleased to have made a product that has been passed as being up to Berry’s renowned high standards and a match to the historic gin.”

The launch is the second gin released by Berry Bros in six months. In September, it unveiled the limited-edition London Dry as a tie-up with the movie Kingsman: The Golden Circle - several scenes of which were shot at Berry Bros’ St James Street base.