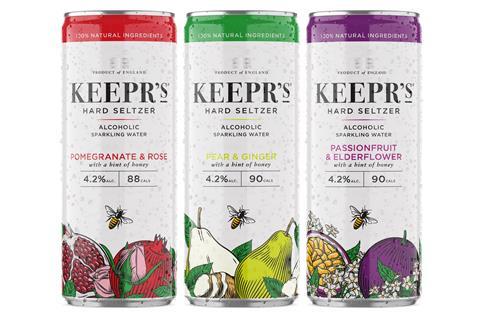 They are aimed at shoppers looking for a lower-alcohol, low-calorie drink

The British Honey Company is expanding its Keepr’s spirits brand with a trio of hard seltzers.

The hard seltzers (4.2% abv) are made with a potato vodka base and 100% natural ingredients, said Keepr’s.

It has launched three flavours – Pear & Ginger, Pomegranate & Rose and Passionfruit & Elderflower – each containing a hint of the company’s signature British honey from its own hives, which it said added a “natural sweetness and a deliciously balanced taste”.

The drinks are aimed at those looking for lower-alcohol, low-calorie options, containing up to 90 calories per 250ml can.

British Honey Company commercial director Oliver Williams said the range would bring new consumers into the hard seltzer category and “trade them up from standard offering to our premium range”.

He said Keepr’s hard seltzers would stand out from others on the market due to being “beautifully packaged”, adding they “genuinely deliver a superior taste experience”.

They launch this week (rsp: £2.75/250ml), with single and mixed flavour cases also rolling out via the British Honey Company shop and Amazon.

The Keepr’s brand made its debut in the low and non-alcoholic drinks category last month with an ultra-low alcohol gin and tonic-style RTD.