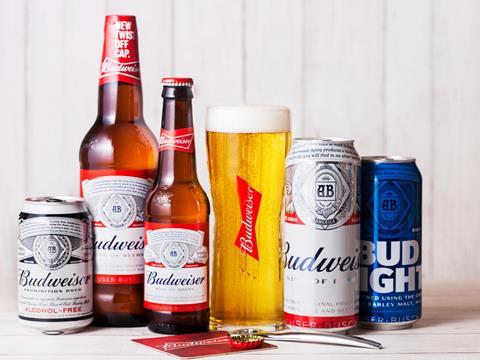 Supermarket value sales of the AB InBev brand (not including its spin-off Bud Light or its alcohol-free Prohibition Brew) have surged by £17.5m to £381.7m.

Budweiser’s growth had been “phenomenal”, said the brand’s UK marketing manager Rowan Chidgey. “Its performance has been driven by its affiliation to key sporting events and cultural moments this year.”

Toby Lancaster, category and shopper marketing director at Foster’s owner Heineken UK, said Heineken expected a “much stronger” performance from the brand over the coming year, with plans to introduce new on-pack promotions offering shoppers the chance to win prizes.

Foster’s would also be “partnering with a leading music app to build further interaction with consumers”, he added.

Foster’s was one of around 30 Heineken brands to suffer mass delists in Tesco last year amid rumours of a pricing dispute.

In April Tesco added a slew of Heineken’s products back to its shelves but the number of Foster’s SKUs available in the super is only three.