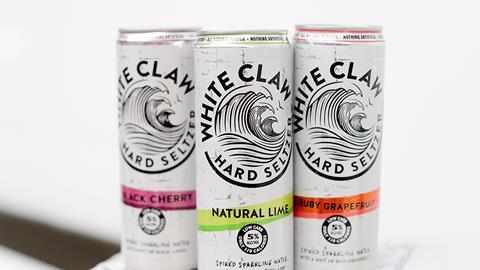 The ‘hard seltzer’ brand, billed as a ‘spiked’ sparkling water at 5% abv, comes in a smorgasbord of fruity flavours. It has taken the US by storm, cultivating the kind of fanbase most drinks brands can only dream of. Searching the brand’s name on Twitter reveals an endless rabbit hole of White Claw gags, fan art, selfies, and even White Claw tattoos (of extremely variable quality).

Now, it looks like White Claw is coming to the UK. As The Grocer revealed last week, White Claw’s owner Mark Anthony Brands has trademarked the drink in the UK. But it’s not alone. Across the pond, hard seltzer has become a booming category in its own right (recent media reports value the category at some $550m already, with one UBS analyst telling Business Insider it could reach $2.5bn by 2021). And UK suppliers have cottoned on, and are starting to release their own hard seltzers.

Kopparberg rolled out Balans (which it dubbed an ‘aqua spritz’) in January, and AB InBev has trademarked Wandering Whistler, a sparkling ‘hard tea’ brand it also sells in the US.

So could what is essentially boozy sparkling water be the next big trend in UK drinks?

It’s wrong to write it off as just a new incarnation of the alcopop, says Kopparberg’s head of marketing Rob Salvesen, who argues it should be looked at as a “lifestyle drink”.

While alcopops are designed to be sweet and palatable, hard seltzers have “a very subtle taste and can be Marmite - those people who like light flavours will like it but maybe not those looking for something full-bodied”.

“Alcopops were all about sweeteners, colours and flavourings,” says Charlie Markland, founder of hard seltzer Bodega Bay. “This is an evolution and sweet-toothed drinkers are coming to it.”

But alcopop drinkers aren’t his main target audience. “We want people - as they do in the States - to replace the beer and cider moment.”

Hard seltzers have achieved such gains in the US by distilling (no pun intended) powerful consumer trends - moderation, hydration, health and convenience - into an accessible form, according to Salvesen.

“Traditionally drinks are full of calories. Anyone who wanted to reduce calories has always been led down the road of a vodka lime and soda,” he says. “[Hard seltzers] deliver on all these things in a 250ml serve.”

Packs will likely get bigger for UK brands if the trend grows, he adds. In the US, 355ml ‘slimline’ cans are standard. But now “the reality is products need to access the grocers’ promotional strategies and the only way you can really do that is in 250ml.”

The big boys of booze are in prime position to move. Diageo and AB InBev both have brands that could be easily brought to these shores, Diageo in the form of Smirnoff Seltzer and AB InBev’s Bon & Viv brand.

Salvesen says it’s bigger names that could help kickstart the trend properly. “There will most likely be a big spend coming from those players if they come over from the States.”

But he says there’s still work to do on “educating consumers as to what this is”. Hence Kopparberg has opted for ‘aqua spritz’ as a more self-explanatory term than ‘hard seltzer’.

“My main frame of reference is kombucha. It’s a fermented tea, and they could easily call it that. Frankly the awareness of kombucha is minimal outside maybe London. Yet these brands have still created a category because it’s got such a distinctive name.”

Whether it’s aqua spritz or hard seltzer, the omens for the drinks are good. “We have been seeing growth week on week,” says Salvesen. “People are picking it up and coming back.”

No concrete date for White Claw’s UK debut has been given, and there’s no certainty that Brits will, in the end, be as receptive as US consumers.

But if those betting on a UK boom for these drinks are right, and their meteoric rise in the US proves repeatable, a shake-up in the BWS aisles could be on the way. And the launch of White Claw could well be the spark that ignites an explosion of new drinks.