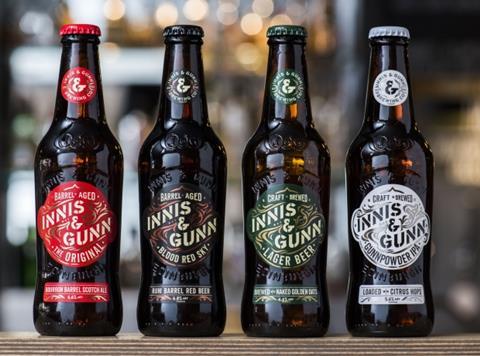 Innis & Gunn has given its beers a major makeover to mark a return to barrel ageing in its production.

The brewer will roll out a new-look 330ml across its core range from mid-October, designed to “give a contemporary and consistent identity” and communicate more clearly the style and characteristics of the brews, which include Original Barrel Aged Scotch Ale (previously named Oak Aged Beer), Innis & Gunn Lager, Gunnpowder IPA and Session IPA.

The move comes as the brand has returned to barrel ageing, which it was forced to abandon in 2010 when faced with a shortage of barrels. It has implemented a new ‘barrel into beer’ technique, by which barrels are broken in to pieces that are toasted and have beer circulated through them for five to 10 days. It means the drinks can be considered as - and labelled - barrel-aged despite not having been held inside an actual barrel. Prior to the rebrand, oak chips were used to age the beers.

The redesign was part of a “six-figure investment into making sure the brand is absolutely right for our customers” said Innis & Gunn founder Dougal Gunn Sharp. “We’ve done a substantial amount of consumer research just to make sure that people who look at our packaging can easily understand what’s in the bottle. That’s the thing with craft beer, there’s a lot of choice, and I think being clear with drinkers about what to expect is very important.”

The rollout would be backed by a “full suite of brand activation activity” over the next six months, he added. “There is a substantial further investment going in.”

“Our growth plans are ambitious,” said Gunn Sharp. “In the UK, our focus remains steadfast on building our barrel-aged and IPA portfolio, on building our lager, and then developing beer kitchens and our retail brand. With our new investor on board it just gives us the capability to grow faster and to do more activities to spread the word.”