US trade war would be ‘devastating’ for Scotch whisky industry, warn UK producers 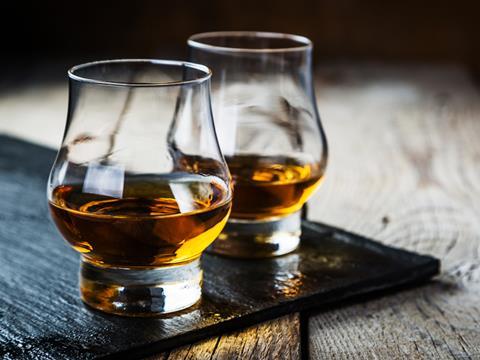 UK spirits producers warn a trade war with the US would lead to price rises for British consumers and deal a devastating blow to Britain’s lucrative Scotch whisky industry.

The EU this week threatened to impose a 25% import tariff on American bourbon – among other high-profile US food and drink exports – in retaliation to tariffs imposed by the US on EU steel and aluminum exports.

There are fears that if the EU presses ahead with the retalitory tariffs, which could come into effect by the end of June under WTO rules, President Trump would respond with tit-for-tat tariffs on UK whisky exports.

This would deal a double blow to the UK spirits industry, forcing distributors of American bourbon to put up prices while at the same time hindering exports of Scotch to the US.

“We have particular concerns about the inclusion of US whiskies in the rebalancing measures list notified by the EU to the WTO and what further damaging impact a tit-for-tat trade war might have on the UK spirits market, UK exports and ultimately the consumer,” said Miles Beale, chief executive of the Wine & Spirit Trade Association.

“Many UK companies have heavily invested in US whiskey and both sides of the Atlantic want to see continued duty-free access for American whiskies to the EU.”

If a full-blown trade war does break out with the US, UK distillers would fare “worse off” than their American counterparts, warned Maria Castroviejo, senior beverages analyst at Rabobank.

Scotch whisky accounts for 70% of the UK’s spirits exports to the US and a fifth of its total exports, she added.

“Spirit exports from the UK to the US are around nine times higher than the volume imported here, which naturally makes the UK more vulnerable than their American counterparts to any tariff hike.”

Although Scotch exporters would be hardest hit, a trade war with the US could also hinder the growth of England’s emerging ‘new world’ whisky industry, producers warn.

“At the end of the day if you stick tariffs on goods no matter where they come from or are going to you end up in a zero sum game in that everybody loses,” said Lakes Distillery CEO Nigel Mills.

So far, the UK government has indicated it would support the proposed EU counterbalancing measures, with Liam Fox has condemned the situation as “patently absurd”, while PM Theresa May reportedly told Donald Trump the tariffs on EU steel were “unjustified and deeply disappointing”.

The Scottish Whisky Association said it was “closely monitoring” the situation. “The economies on both sides of the Atlantic depend on trade for their continued prosperity,” said a spokesman. “We hope that both sides can continue to engage to resolve this situation.”

The US originally granted the EU, Canada and Mexico an exemption on steel and aluminum tariffs announced last March, but lifted the waiver at the beginning of June, citing insufficient progress with its allies to reduce America’s trade deficit.

President Trump has so far remained defiant in the face of the EU’s WTO challenge, tweeting last week that the US had been “ripped off by other countries for years on trade”.