Was Asda's promo blitz the prelude to a price war?

The price war announced by Morrisons CEO Dalton Philips two weeks ago appears to have got off to a slow start, leading more than one rival supermarket to question whether this is anything more than the regular “cut and thrust” of supermarket price & promotion antics.

Philips promised to run fewer but more targeted promotions. The latest Grocer 33 pricing survey (pxx) actually shows an increase in the number of promotions but not much in the way of the deeper discounts Philips was promising on targeted lines.

And there was certainly little sign of an impending price war in the featured space promotions of Morrisons in the four weeks up to 16 March (the Morrisons announcement was on 13 March).

Analysis compiled for The Grocer by featured space analysts Assosia showed that, with the exception of Asda, the number of promotions month on month stayed broadly flat.

Asda, despite its EDLP mantra, led the way in increasing promotions year on year. With 230 more deals, that represents a massive 13.6% upswing (although it still runs fewer than its big four rivals).

Sainsbury’s, which leads the pack in terms of volume on deal, also increased promo activity, up 10.3% to 2,704 - a figure offset by a typical average saving fall of over 300 basis points.

Promos at Morrisons trailed some way behind, up 4.87%. The average saving also fell, albeit by a smaller amount.

However, of the top six, Waitrose was the only retailer to offer greater savings compared with both last month and last year.

This suggests Waitrose is reacting to changing customer needs, according to Assosia MD Kay Staniland. Along with Tesco, it is also showing a decrease in the average starting price of products on offer compared with last year.

“I think this is an indication they are taking the price war seriously,” she argues.

And though Tesco did not significantly increase the number of promotions, the typical average saving rose to 33%, up 150 basis points year on year.

Many key packaging materials continue to be cheaper than a year ago. LDPE and HDPE are falling thanks to lower ethylene prices, while polystyrene is down because its feedstock, styrene, has fallen in price. 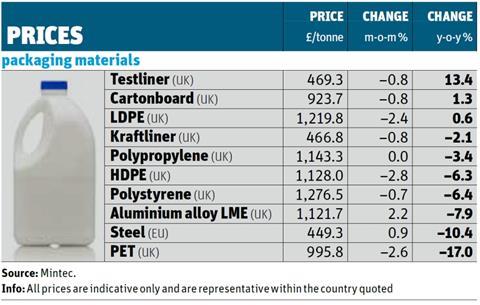 PET prices in the UK have dropped by nearly 20% over the past year and are down 2.6% month on month because of low demand, weakened feedstock prices and strong competition from Asia.

Aluminium prices also remain down year on year, thanks to good supply and increased stocks, with UK prices for alloy currently £1,121.70/t, down 7.9% year on year. Meanwhile, EU steel prices have dropped 10.4% over the past year in response to world steel output rising.

However, as the global economy has strengthened, demand for materials such as testliner has picked up, and UK prices are now nearly 15% up year on year. Some buyers are switching into testliner from more expensive alternatives.