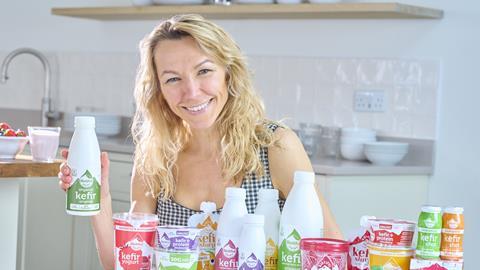 It’s milky. It’s a little bit fizzy. And it’s full of live cultures. Let’s face it: making kefir work in the UK was never going to be easy. But Biotiful dairy founder Natasha Bowes is not someone who shies away from a challenge.

Moscow-born Bowes, a former figure skater and finance veteran, has spent the past nine-and-a-half years working to make kefir a central part of the nation’s diet, rather than a niche product for health nuts.

That work has paid off. Biotiful hit £17.9m in UK retail last year, an increase of 36.8% on the year before [Nielsen 52 w/e 26 December 2020]. For Bowes, this is all down to a growing understanding of gut health – something she has been enthusiastically championing alongside fellow entrepreneurs like Megan Rossi of Bio & Me.

“Gut health is having a mass explosion,” she says. “And what’s really important for me is the contribution that we make by creating these products that are tasty and healthy. It’s such an easy solution to what brings people down on a consistent basis – a significant portion of the population have digestive issues and bloatedness.”

New lines and formats have been part of this mission to make the solution as easy as possible. In 2020 alone, Biotiful combined kefir with cheese for a range of spreadable pots, poured its drinks into a trendy ‘shot’ format, and rolled out a range of full-sized yoghurt pots.

“It’s something we pride ourselves in, the speed at which we bring our products to market,” says Bowes.

Now it’s preparing to launch its boldest innovation yet: a plant-based kefir. The oat-based recipe will roll out in autumn with a trio of flavours – Original, Strawberry and Mango – in 250ml bottles.

The best business advice I ever received: The business is the team

And the worst: I’m not sure, as I didn’t listen!

The last great book I read: 21 Lessons for the 21st century by Yuval Harari

The last great album I listened to: Mozart (practically any)

If I could have lunch with one person: My dad. I haven’t seen him for two years because of the pandemic

If it sounds tricky to make a plant-based version of a drink that relies on dairy for its very essence, that’s because it is.

“The starting point, the base, needs to have carbohydrates to get the natural sugars, in order for the fermentation process to occur naturally – as opposed to water kefir, where you have to add sugar to kick off the fermentation,” says Bowes.

“So it had to be oats as a natural carbohydrate, which have been surprisingly fertile ground for creating a kefir product. Then, in order to achieve the almost dairy-like perception of the milkiness and the creaminess, there’s a blend of a little bit of coconut and a little bit of rice. Then we ferment the liquidised base with vegan cultures.”

The recipe wasn’t the only tricky part. Biotiful had to find an entirely new (unnamed) supplier to make the product. “Dairy is by definition natural and such fertile ground for creating flavours and playing with texture – you can make it as creamy or as thin as you like quite easily. With plant-based you have to work much harder.”

It was also more expensive to make, which is why the finished SKUs will ring in at £1.85 per bottle compared with £1.45 for its dairy-based kefir.

That being said, developing a plant-based product is “much more fun”, Bowes says. “There are many more ingredients you can work with and, as the technology develops, I think there will be infinitely more possibilities.”

Indeed, should they be successful, Bowes says there is scope to expand its plant-based range in a similar way to its dairy one. Which means plant-based kefir shots, yoghurts and cheeses could yet be on the cards. However, she is careful to stress “we want to make sure we drive trial and penetration before we go bigger”. 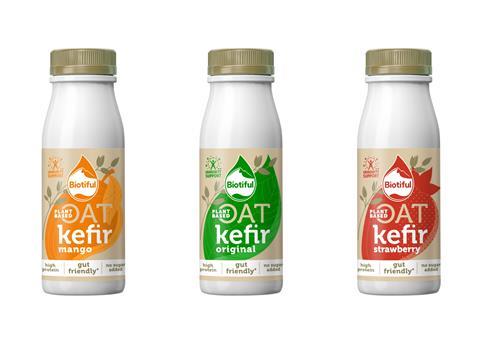 Biotful is certainly in the right place at the right time with a vegan-friendly SKU. Bowes is convinced we’re about to see an even greater plant-based explosion.

That could all change. “We all know that, in the medium to long term, the plant-based versions of the main category products will be such an important part of the consumer’s day to day – the future is most certainly going to be dominated by plant-based”.

Crucially, Bowes sees her plant-based formula as an addition to – rather than a deviation from – the core principle of Biotiful. That is to promote the concept of gut health to the masses.

“It’s important not to overcomplicate this,” she says. “Fundamentally, our bodies are one system, so it’s not surprising that everything is interconnected.

“What is perhaps surprising is that what’s inside of one very significant organ – our digestive tract – can be described as two to two-and-a-half kilograms of other organisms that co-habit us. And the impact that this combined living organism has on us is all-encompassing.

“What we take in to this system has a profound impact on how we operate and what energy we give out back to the world.” 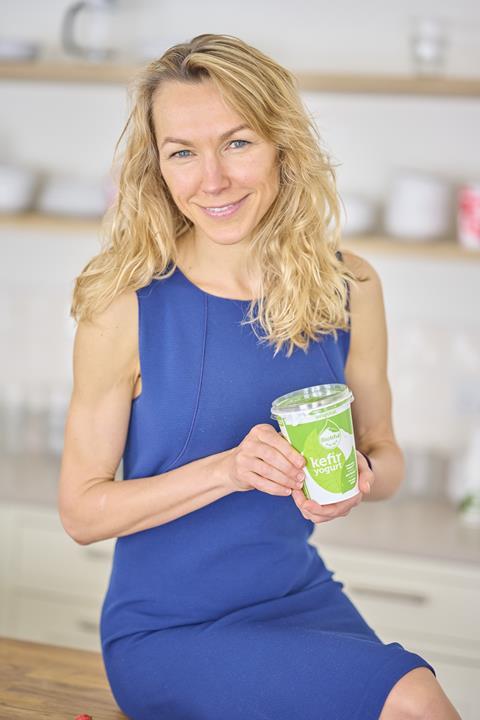 While happy to talk about the principles of gut health, Bowes repeatedly stresses that she is “not a scientist”. But you get the sense that she approaches all areas of her business with an almost forensic attention to detail.

That’s not just the kefir itself. She has a fascination with the macro trends in food and drink, such as the growing consumer obsession with health and the rapid advancement of technology.

For her, those two trends have the potential to meet, in the form of personalised nutrition.

“In the context of balance and what we take in – probiotics, prebiotics, sleep, the active lifestyle – the balance is very intricate and none of that is ever going to be right in the same format for every one of us,” she says.

“So I believe nutrition and overall lifestyle advice and data around it is going to move towards personalisation,” Bowes explains.

“You can see the evidence of that already in the number of applications in this space. But there isn’t yet anything created that is so all-encompassing and slick that it appeals to the vast majority of the population.

“As far as nutrition goes, I don’t think the data is there yet in a format that can be properly personalised – but it will be fascinating to see how that will be delivered to us.”

If a plant-based kefir can be made, a technology-driven personalised nutrition service might not be that improbable, after all.