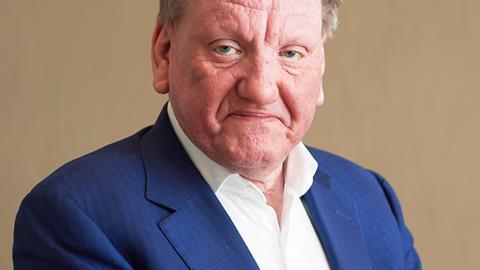 As the straight-talking FDF CEO prepares to stand down, he talks us through boosting the federation’s profile, upsetting Jamie Oliver and why he’s not going quietly

Former Diageo and Liberal Democrat spin doctor Ian Wright’s career as FDF boss almost came crashing to an abrupt halt before it even got started.

On his first day, he was so shocked at the state of the organisation’s dilapidated offices in Covent Garden that he almost handed back the contract. “It was an embarrassment – what sort of impression did that give for one of the UK’s most important business sectors?” he says. The FDF boss was just as aghast at the organisation’s lack of clout.

Luckily, he made it past those ropey first impressions. Six years later – three years later than he had expected – Wright has just announced his decision to step down. “I’ve decided to go now because we’re coming to the end of a six-year process of reinventing the organisation as a serious player – as a voice of the industry as opposed to what had been a highly technical and regulatory body with not that much credibility in the corridors of power,” he says.

It’s no overstatement to say Wright has been a transformative force at the FDF. For starters, he oversaw the sale of the aforementioned Covent Garden offices, to help shore up its precarious financial position, and to pave a way to a new home in Bloomsbury Way.

But arguably the biggest change has been in the FDF’s profile. “When I took the job, I remember thinking I’d worked for major businesses in the industry, like Boots and Diageo, and I couldn’t even remember having any contact with the FDF,” he recalls.

So Wright, who pulled the corporate comms strings at Diageo for 14 years, used his experience to change that. Under his leadership, the FDF’s membership has grown from 160 companies to around 900.

At the same time, it has become the umbrella for an industry roundtable group representing dozens of other trade bodies. “My first job was to persuade them we aren’t the scientific civil service,” says Wright.

His reputation for being a colourful and often outspoken leader likely helped to dispel that perception. He has certainly has not been afraid to rock the boat.

Branding the boss of the NHS rude and labelling the chief of the World Health Organization a “communist” were just a couple of examples, though Wright insists he is not as much of a bruiser as he can appear.

“I don’t think I’m confrontational. I think I’m just loud. I don’t recall upsetting many people, apart maybe Jamie Oliver on Newsnight once, because I thought he was being really disrespectful to the food industry,” he says. “But I don’t go on Twitter, I don’t go on Facebook and I also have a team that I think will tell me if I’ve gone too far.

“I don’t take any notice of people if they are being rude about me and anyway, they should have better things to do with their time, like reading Dickens.”

Most importantly, Wright is happy the FDF is now punching its weight in conversations with government. That’s just as well, considering the multitude of issues facing the industry – on which Wright holds some strong views.

A former close ally of Nick Clegg, he has been a staunch opponent of Brexit, issuing often apocalyptic warnings of its impact on the industry, and navigating the post-Brexit landscape as co-chair of the Food & Drink Sector Council,which held its latest meeting last week.

“I don’t take any notice of people if they are being rude about me and anyway, they should have better things to do with their time, like reading Dickens”

Since the pandemic took hold , Wright has been a key voice in the Defra ‘war room’. All things considered – the enormous pressure of the initial panic buying, raft of factory outbreaks and delays in PPE provision and mass testing – keeping the wheels of the industry turning has been no mean feat.

“I’m pretty proud of what we’ve achieved,” says Wright. That’s despite obvious political differences with Defra on issues such as Brexit, whilst he has campaigned, unsuccessfully to date, for the government to appoint a minister for hunger to tackle food poverty caused by Covid.

Read more: The FDF will do well to find as determined and persuasive a new leader as Ian Wright

“I think the relationship with Defra is one of mutual respect. I and other industry leaders don’t always agree with them, but the government does takes us seriously,” says Wright. “I think George Eustice has been an outstanding Secretary of State. It clearly can’t be anything to do with our shared political views because they couldn’t be more divergent.”

“I’m also proud that with the trade body round table, we have 32 trade associations that are on a call every week.”

Working with other trade organisations: “When I first started it was like connecting with ferrets in a sack. They reminded me of that Monty Python scene with the People’s Front of Judea. I’d ask them what they thought of someone and they’d say, ‘We don’t know them very well, but we f***ing hate them.’”

On former WHO boss Margaret Chan: “She basically said that industry not only has no role in public health but had no right to a place at the debating table. That’s fundamentally wrong, although she is, of course, a Communist.”

On government health policy: “One minister I met said that if people didn’t like the taste of reformulated products that was just, ‘first world problems and they need to get over it’. Actually, it is something else entirely. It is middle-class people telling working-class people what to do.”

Wright admits he couldn’t have chosen a more rollercoaster period to be at the helm, with the wars on plastic and obesity also challenging food companies, alongside the twin threats of Brexit and Covid.

But there is one constant amid all this: food itself. “I think food and drink is always that because it’s so central to our national life. The job of the FDF is to make sure we are at the heart of the conversation. “We will no doubt go through periods where the news is less apocalyptic but the FDF’s job will remain the same. What we need to do is to connect the fortunes of the food industry and its membership, so we speak for them.”.

And it shows no sign of slowing down. With the full impact of the pandemic and Brexit still to unravel, COP26 on the horizon, a ban on HFSS promotions in the pipeline, as well as taxes on plastic and calls for the expansion of the sugar levy, Wright by no means sees his decision to leave as a matter of job done. He says it is vital the FDF keeps up the momentum with a new leader at the helm.

“What most leaders are very bad at is understanding their own corporate mortality,” he says. “I’ve seen some of the greatest leaders I’ve ever worked with who just could never imagine anyone else at the helm. I’ve always been determined that would not be me.”

“We will no doubt go through periods where the news is less apocalyptic but the FDF’s job will remain the same. What we need to do is to connect the fortunes of the food industry and its membership, we speak for them.”

For his part, he has a couple of job offers already in the bag, which he’s keeping close to his chest. But as befits his tenure, Wright won’t be going quietly. “I’m not going to be sitting back on the sun lounger with my cigar and champagne,” he says. “This is going to be another six months of hand-to-hand combat.”