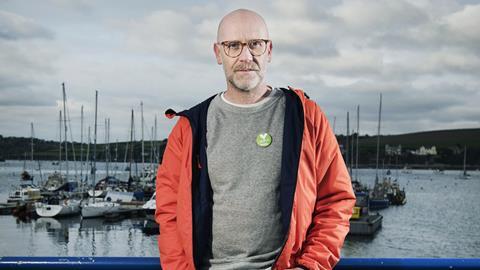 Meet the man asking Theresa May to ditch meat

Veganuary’s head of campaigns Rich Hardy is behind a tougher stance at the charity, as it looks to capitalise on the health and environmental benefits of plant-based. He even wants parliament to try it

Fur trapping, industrial scale farming and manning slaughterhouses - Rich Hardy’s CV isn’t what you’d expect from a vegan of 33 years, and the new head of campaigns at Veganuary. “I’ve done a lot of jobs that conflict with my ethics,” he agrees. “But I feel it’s important that the stories of farm animals are told.” So Hardy worked undercover for years, with Compassion in World Farming, and other NGOs, to expose what he believes are the “big problems with big agriculture”. Now though he’s firmly in the spotlight, fronting arguably the biggest diet trend of the past few years. Why? “I felt like it was time to jump back into becoming part of the solution.”

Though it is almost exclusively known for supporting people through a month long-pledge to ditch animal products from their diets, Veganuary - both the name of the organisation and the campaign - began life as an animal rights charity. Five years ago it realised that a proactive way to get across its message, and reconcile this with an ongoing strain on health services and concerns around climate change (in which it had also taken an interest), was to provide a practical route for people to try veganism, complete with a palatable 31-day time limit and, pitched to coincide with the new year’s resolution rush.

Undoubtedly it’s easier than ever for consumers to dive into the burgeoning plant-based market, valued at £352.1m in 2018 by Kantar Worldpanel, up 14.3% on 2017. In fact, 16% of last year’s new UK product launches were plant-based, double the number brought out in 2015, allowing the UK to knock Germany off the top spot as world leader for vegan launches [Mintel].

Potted CV: Played at academy level for Aldershot FC as a teenager, and was poised to sign as a professional footballer before the deal fell through. Then became a junior campaigner at CIWF, which included taking on a range of undercover roles in the livestock farming industry, before joining Veganuary last year

Hobbies: Surfing and tending to my allotment

Steepest learning curve: This campaign, preparing to take Veganuary international in under four months, has been pretty intense

What do you think of Greggs’ vegan sausage roll? I’m yet to try it

Hardy joined in the midst of this whirlwind of launches, appointed as part of a recruitment drive in August 2018. Even so, the charity remains a small fish, with fewer than 10 full-time staff. That hasn’t stopped him aiming big though. Speaking at the All-Party Parliamentary Group on Vegetarianism & Veganism meeting last week, Hardy challenged the Houses of Parliament to go plant-based during next year’s campaign. The move marks a step-change in the campaign’s approach under Hardy, from a relatively relaxed tone to a far tougher stance. “We felt Veganuary had the traction to do more than just be a public campaign and that it would be remiss of us not to challenge our political leaders to find ways to incorporate more ways of plant-based living, because without their intervention changes won’t happen on the same scale.”

Veganism remains contentious in politics. “Initially, we challenged the climate minister [Claire Perry]. Because on the back of the IPCC report, she said she wouldn’t be telling the nation to reduce the amount of steak and chips in their diets. She thought it was a nanny state idea.

“But when sugary drinks were deemed bad for public health, there was a sugar tax,” he argues. And the facts, as Veganuary sees them, are that those who eat meat are much more likely to be overweight, suffer from high cholesterol, high blood pressure or type 2 diabetes.

“There has been a lot of talk of a meat tax, most recently by Caroline Lucas at the Oxford Farming Conference. At the very least I’m not sure support for the agriculture industry through subsidies is a great thing, when there are companies innovating on their own to make plant-based foods taste as good as meat, as accessible as meat and as cheap as meat. They’re not getting the support they need.”

Those with farming constituencies (unsurprisingly) see things differently. One Shropshire local councillor last week demanded the charity’s adverts suggesting the public ‘try vegan’ should be taken down as they were an affront to a ‘great county built on agriculture’. And Jacob Rees-Mogg has said he would feel “disloyal” eating in a vegan restaurant because his constituency was a farming community. It has also come in for criticism from NFU Cymru and the National Sheep Association, which called Veganuary a ‘co-ordinated campaign against livestock farming’ as the farming industry faces a ‘torrent of false claims of crimes against animal welfare’.

There’s a lack of understanding of what Veganuary is in some circles, insists Hardy. “Other organisations on the peripheries of the Veganuary movement might use more emotive language, but it’s not our style. We’re not trying to guilt trip anyone, we’re just asking people to try it out and then make an informed decision.

“Of the people who do Veganuary, around 60% stay vegan afterwards. For some, it might not be for them, and others might decide to go vegan one or two days a week. But people considering cutting the amount of meat and dairy in their lives is a good thing all round. Not just for cutting the number of animals in our farming system, but for their health and the environment.”

Further aspersions have been cast on claims that vegan diets are healthier. Hardy has repeatedly gone head-to-head with industry critics and commentators, including The Grocer columnist Joanna Blythman, to reject suggestions that a vegan diet would lead to overconsumption of highly processed meat alternatives.

Joanna Blythman: Veganism was behind the ‘meat tax’ hype – so what happened to critical thinking?

“You don’t want to be relying on vegan junk food - that won’t cut the lines at the NHS,” he says. “All the new grab-and-go dishes appearing on shelves are great for an entry-level vegan, they make it so much easier to make the shift. But once they’ve levelled up after a month or so they could start to explore more traditional veganism, using vegetables and pulses and cooking with all the ingredients available to them.”

Trenchant carnivores haven’t been the only issue facing the campaign though. During peak sign-up season, the period between Christmas and new year, Veganuary’s website crashed under the sheer volume of visitors. It was something of a disappointment to the charity, which would likely be much closer to its initial prediction of 300,000 pledges if it had those days back, believes Hardy.

Whatever’s on the menu, Hardy is convinced plant-based eating is here to stay. “Being a lifelong campaigner, I’ve found there’s a pattern with movements. First they’re ignored, and we’ve been ignored. Then they’re laughed at - I suppose veganism has been. Then they’re fought against. But ultimately, they win. The status quo is fighting against our movement, so there’s a good chance something huge is coming.”