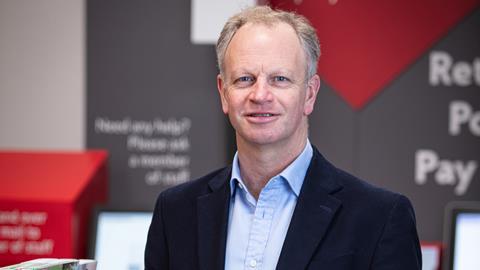 Former Nisa CEO Nick Read was tasked with making the Post Office commercially viable. First, he’s had to deal with a legal battle and a global pandemic

When Nick Read joined the Post Office as CEO last year, he had a clear mission: to ensure it was commercially viable without government subsidies.

That’s no small task. For the majority of its 350-year history, the Post Office has relied on public funding. Last month marked the end of that era, as it received its final instalment, to the tune of £227m.

Luckily, Read is experienced in managing change. In grocery circles, he’s best known for his turbulent tenure as CEO of Nisa, during which he led a hard-fought turnaround before playing a key role in its eventual sale to the Co-op for £143m in 2018. His CV boasts similarly demanding senior roles at Thomas Cook and Tesco.

So Read was looking forward to applying these lessons to the Post Office. Yet, as fate would have it, other challenges reared their head with greater urgency. Most recently, the small matter of a global pandemic.

From purely a revenue point of view, it’s been a boost. Read says turnover has seen “exponential growth” – the mail and parcels side of the business has surged – though he remains tight-lipped on the figures. “The pandemic has helped us demonstrate we have a social role to play, he says. “People have recognised we have been their community hub. In the first lockdown when banks were closing along with other retail, people found a reason to go to the Post Office.”

But it’s also provided some timely food for thought, as Read sets about determining the future of the Post Office. “The pandemic has helped me focus on what is the most important part of the business,” he says. “As an example, people always say they love the Post Office. That’s really important and we can build on it, but at the same time there’s got to be something a little more tangible about the brand. I need people to turn around and say I love the Post Office because of X or Y. So getting some brand clarity is important.”

A second, and arguably more complex, challenge has been the fallout from the historic Horizon accounting scandal. In December, Read’s first public outing as CEO came when the Post Office settled its major High Court litigation battle with hundreds of former sub-postmasters, agreeing to pay out almost £60m in compensation.

It was a landmark moment in a three-year legal battle (split into four trials) that saw 550 sub-postmasters sue the Post Office after they were blamed, and in some cases criminalised, for shortfalls in accounts at their branches following the introduction of the Horizon IT system in 1999. The claimants alleged the errors were down to software defects in the computer system.

The December settlement came after days of mediation with the postmasters. At the time, Read earned praise from Alan Bates, one of the lead claimants, for his efforts “to reset the relationship between the Post Office and its sub-postmasters”.

This October, the Post Office confirmed it would not be opposing the appeals of 44 of the 47 postmasters against their convictions, which will likely result in them being quashed in the upcoming hearing.

“I need to regain the trust and confidence of the postmasters,” Read says. “We are putting a serving postmaster on to the board. Symbolically and practically I recognise the need to engage with postmasters. We are doing this through a consultation.” Following a six-month review, £37m is also being set aside to make postmaster remuneration “fairer”. Read can now push forward with his strategic plans. He cites the Post Office’s franchise operation as a crucial part of his goal to transform it from a “historically very arms-length government-owned operation to a different model”.

Looking at the make-up of the Post Office estate, that focus certainly makes sense. Of its 11,500 branches, only 116 Crown Post Offices remain. The rest are run with retail partners on an agency or franchise basis situated within multiples, independent convenience stores – even pubs, churches and fish & chip shops.

“I need to make it as simple and as easy as possible for retailers to establish Post Offices,” says Read. “I’ve got to build a set of propositions that are immensely attractive to postmasters to run. They need to be simple to operate and give them a chance as entrepreneurs to grow the business. And that is really the commercial driver behind my appointment.”

During a two-day postmaster course, Read gained first-hand experience of Post Office systems and was quickly able to identify areas that needed simplification, ranging from making Horizon more user-friendly to shortening steps to run a transaction.

“The system was designed a long time ago, and was made for the Crown Post Offices, not franchises. I don’t think a great deal of thought was taken as to how simple it needed to be to operate in a busy retail environment.”

Read has plans to bring Horizon in-house for the first time, and has begun a major recruitment drive to bolster the IT team. The simplification will begin with the three biggest revenue drivers: mail and parcels, cash and banking, and the retail offer. (“The expansion of other less-used services has been to the detriment of more obvious transactions,” he says.)

He also wants to ensure people have access to banking via the Post Office as banks leave the high street. “From a cash perspective, we believe as bank branches close, we will be there to provide essential everyday banking services. We will be the last bank in town.”

Though investment is being made in the Post Office’s digital offer, Read says there is still a role for bricks and mortar. “We know we have to make ourselves more relevant in a digital world,” he says. “But at the same time, we have an ageing population and we have a unique commercial and social obligation to look after them.”

A hybrid approach, combining a digital offer with a physical store, is already emerging. The Post Office launched a new ‘Drop & Go’ service this year, which allows customers to register a parcel online before arriving at the Post Office counter, streamlining the process for a postmaster and shortening queues.

The transformation he envisages certainly won’t be easy. Continuing to embrace technology and adapt to fast-changing consumer needs while retaining its core community hub status looks like a fine balancing act. Or, as Read sees it, “a fantastic challenge”.