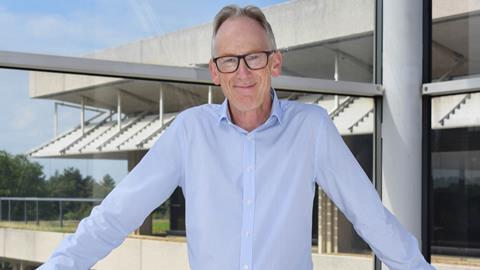 Sales at Southern Co-op have more than doubled since CEO Mark Smith joined, but as competition heats up, he’s slowed the rate of growth. Why?

Mark Smith took over the top job at Southern Co-op within days of the collapse of the investment bank Lehman Brothers. “It was like, here’s your big opportunity, here’s your first chief exec role… oh the whole world’s collapsed around you,” he recalls, laughing.

But as we now know, while the financial crash wreaked havoc, including in retail, the convenience channel thrived as frugal shoppers switched to smaller baskets and operators like Southern upped their game.

As a result Smith, who cut his teeth in retail at M&S, has been able to grow the business markedly, with turnover up 127% in the past decade to £450.9m.

And he’s far from finished - his sights are set on half a billion pounds. “We want a bit more scale. We want to be big enough so we can continue to invest money in communities in significant amounts.”

Already the co-op invests £1.2m in community projects, from a store estate that has grown steadily. Since Smith assumed the top role, store numbers have more than doubled to 207, taking a business predominantly located in Hampshire, West Sussex and part of Dorset to one that stretches all the way from Kent to Devon.

Potted CV: Held various senior finance and commercial roles at M&S and British Waterways, before joining Southern Co-op in 2005 as CFO and being appointed CEO in 2008. He was also appointed the Prince of Wales’ Responsible Business Ambassador for the South East in 2016

Worst career decision: Taking a post outside of retail

Business mantra: Business needs to be a force for good

Best piece of advice (given or received): Never assume people think exactly as you do

It was this latent potential that drew Smith to the society in the first place. “There was a sleeping giant thing here that had lost its way, and there was an opportunity for a new generation of people to come in and make it more relevant.”

But sustaining growth is getting harder - not least because everyone now wants a slice of convenience.

“It has got massively more competitive,” Smith says. “Everyone has piled into convenience. It’s been an interesting channel because it was probably the least impacted retail channel in the financial crash, and that’s great. But it does mean every man and his dog wants a piece of it. Asda aside, all the big players charged in. There are today an awful lot more of these places than there were even six or seven years ago.”

The discounters are beginning to bite, too. “When I started in this role, the hard discounters were hard discounters. There were a fraction of the number there are today and they were a totally different proposition, or perceived proposition by the customer. At that point in time, in the nicest possible way, they attracted a very specific demographic. Nothing could be further from today in everything I just said there.”

All which means battling for space to build. With limited supply, the pricing of suitable sites has got “quite steamy”. “We’ve had six or seven years of pretty much everyone in this sector chasing like crazy. We’ve added 100 in the past five years, but the bigger stores have done that per annum.”

One way to circumnavigate a scarcity of new sites is expanding its franchising model, which currently has around 42 stores. “It’s a sector we think can grow further and allows us to have a presence in some locations which wouldn’t be right for our managed estate.”

But all this competition has seen growth slow. In its latest figures, turnover growth at Southern slowed to 4.6% (y/e 27 January 2019), compared with 9.5% the year before, with only two store openings.

Smith’s focus now is on making more of the existing estate. “It’s important that it doesn’t become a numbers game. We need to remain focused on the good opportunities. And, having added 100 stores in a relatively short time, we need to get those to maturity.”

“We start with the expression: if you don’t do well at school, you’ll end up stacking shelves. It’s so wrong”

Access to the co-operative buying alliance, the Federal Retail and Trading Services, is a major help. It’s an “absolute lifeblood” says Smith, with sales benefiting from the “excellent enhancements” to Co-op own brand products.

There is a flipside though. When the Co-operative Group was pushed to the brink of collapse in 2013, Southern’s sales took a hit too. And members don’t pull any punches, either. “I don’t think there’s another example of an alliance where members are so actively competing.”

To stand out, Southern has rolled out Cook concessions into a further 10 stores, added 49 self-serve coffee machines and experimented with no less than 180 store ‘projects’ to see which sizes, formats and merchandising worked for customers.

Smith is also focused on recruiting and retaining good people. “We start with the expression: if you don’t do well at school, you’ll end up stacking shelves. It’s so wrong, but it sums up the challenge. We have to all work even harder to show what good careers there can be in retail and in grocery. The sector is awash with people who have gone from bottom to top in a way that’s quite unusual in many industries.”

He also wants to make sure Southern is capitalising on the opportunities brought about by new technology. It’s a big investment, but one he believes will pay off. “It’s an untapped opportunity for us as a member-owned business.”

And another significant strand of its future strategy is food-to-go. “We have a number of stores in edge of city locations, often near universities or commercial areas, where the volume of the food-to-go piece has really turned up. It’s a big change that has taken off over the past couple of years.”

It all feeds into the need to “serve customers on less clear shopping missions”.

It’s an opportunity. But a crowded one. And the challenge for Southern is to “make sure we grab it or, sure as heck, someone else will”.