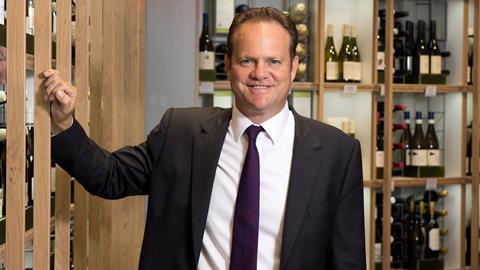 Waitrose MD Rob Collins is focusing on in-store improvements over expansion – and he’s pushing hard on the environment and online, too

As he leads a tour of the Motcomb Street store in Belgravia, Rob Collins gushes over the provenance of the meat and cheese. Even by Waitrose standards it’s a swanky location, and the porticoes on either side of the entrance add to the sense of grandeur. But the treatment it’s undergone in a recent refurbishment is typical, with the new Sushi Daily concession one of 95 in its estate, for example.

The retailer is two thirds of the way through its refurbishment programme, part of an improvement drive that halted its investment in new space, to focus on optimisation, including sizeable investments in infrastructure, processes and online expansion.

So, how’s the plan coming along? Its half-year results this week were a mixed bag. While sales were down 0.7%, profits jumped 14.7% to £110.1m, and even excluding property profits of £12.1m following store disposals, profits were still ahead of last year, it reported. And Collins insists it’s on the right track, with the return Waitrose is getting on its refurbishment “well ahead” of what it was originally targeting. Plus customer feedback speaks for itself. “Now customers are saying ‘you’ve really given me something different, and better than I had before’,” he claims.

Of course, the picture isn’t all rosy. In July, Waitrose announced plans to close a further seven stores because they were “not profitable in the long term”. This was the third round of closures since June last year, bringing the total to 17, though Collins assures there will “not be any more closures announced this trading year”.

But it’s not all just about improving the stores. Waitrose also had to use some of the extra money to make “significant investments” in infrastructure, in areas like stock management - everything from transport to stock reporting to management of product data to tailoring ranges to different shops. “We’ve spent north of £100m on all of that, which is a big investment for a business of our size. It included giving our partners multi-functional devices that means they have everything they need at their fingertips.”

The third area in which Waitrose has been investing is online. “We’re accelerating that now and we want to triple our online business over the next three years to £1bn.”

The half-year online results were encouraging, up 10.7% and Collins insists “sales will continue to build” despite Ocado’s decision to end its supply agreement in September 2020. Nor will the target be affected by this week’s announcement that Waitrose has pulled out of its agreement, signed in May, to use Ocado co-founder Jon Faiman’s Today Development Partners to help expand.

Instead it’s backing its own team to deliver the goods: having explored its options, Waitrose decided the “best route forward is to progress just within the Partnership”, says Collins, a ringing endorsement for former retail director Ben Stimson, who was promoted to digital director, also in May, to “look after all things online”. “What we do is put our best people on the things that are most important to us,” he adds.

Parting ways with Ocado will mean a substantial loss of revenue but as well as the improvements it’s making (it won the star order in the Online 33 with a score of 98/100) and the extra CFCs it’s planning, Collins is confident Ocado customers will switch to waitrose.com once supply switches over, and acknowledges that the new arrangement will provide much greater clarity.

Clarity is also at the heart of a major review of the range, which kicked off last summer. “We’ve now done 54 categories, with 25 still to go. As a result we’ve a slightly narrower range - about 10% on average across those ranges - and have seen improved availability, a high proportion of own brand, less wastage and better sales. It’s ticked every box for us.”

Business mantra: Confidence is our friend, complacency our enemy

A lot of care has gone into the review. “It’s tempting to look [only] at what’s selling and what isn’t selling,” says Collins. But “we’ve taken it a stage further. If sales are not enormous, but we see that our most loyal customers are buying that yoghurt, we keep it.”

Collins also wants Waitrose to distinguish itself through NPD. It opened a new food innovation studio in Bracknell at its head office last year, which has allowed it to “really accelerate the pace of innovation”. “Our ‘Scrumptious Summer’ range, which has about 200 lines, is a direct follow-on from that.”

It’s gone well, says Collins. “I struggle to think of a new product we’ve brought in through our innovation studio which hasn’t done well.” And it’s got some exciting plans coming in the autumn, [including a relaunch of its premium range, Waitrose 1, with 150 new product lines].”

Waitrose is also pushing its sustainability agenda. Its Unpacked packaging-free trial in May, has now been extended, but it’s only one of a range of initiatives.

“Customers want us to make it easy for them to shop in a sustainable way - whether that’s on microbeads, plastic cotton buds, or being the first supermarket to get rid of black plastic, [the moves we’ve made] are all things that really matter to our customers.”

And for all the turmoil on the high street, he’s confident the future of Waitrose is sustainable too. “We don’t try to maximise our profit. We try to make sufficient profit to invest back in our business and give our partners a reasonable level of return. If we can do those two things, that’s really powerful.”