My Week… by Richard Pennycook (as told to Bill Tush) 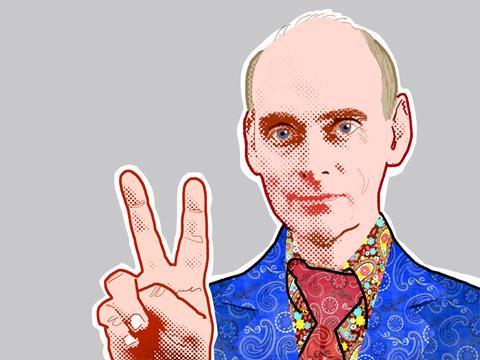 Peace, brothers and sisters. And also love and dividend stamps. As a child of the groovy 1960s it’s long been my bag to make the Co-op, like, chilled again. You know, get rid of the breadheads (except for the cool dudes and chicks at Warburtons and Kingsmill) and all those heavy trips around making dough, you dig? Like I did when I cut my own pay to only 50 times that of the company average.

So we held a happening at our Manchester pad with Allan and Chris and those funky cats Ruth and Hazel. Vic lit a joss stick and put on a Desmond Dekker LP and I said, like, guys, how are we going to make Co-op really bad? You know, bad, like, as in good.

It was such a mellow thought that no one said anything for, like, ages. I thought everyone was gassed until I heard the snoring from all round the room. But then Allan opened his eyes with a zoned-out look and said, like, “Dude, I see Co-op written in the blue sky, in cloud. In a copyright-protected and trademarked font. And with all the flower children, like, sharing their community surplus (using highly granular adaptive customer insight metrics)”.

It was all, like, a head rush. What hipper way to modernise the Co-op than to drag it back half a century?! Beautiful. OK, the squares in marketing said we couldn’t bring back the stamps because that meant violating Mother Earth by chopping down her groovy trees, but I said chill, cats. Simply capture customer behavioural data through geofenced networks, or get them to network by tapping on an NFC tag to connect to an enrolment engine. Like, wow.

All we gotta do now is make an app that understands £sd.