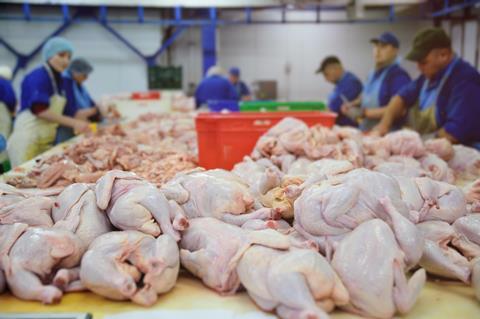 The sector is facing a shortfall of 10,000 workers this year, according to the BPC

Poultry processors face extra recruitment and staff retention costs of at least £15m a year as a result of the government’s proposed clampdown on so-called low-skilled labour.

And these additional costs could ultimately affect the price and availability of supermarket chicken, with British Poultry Council CEO Richard Griffiths warning the new rules “will have an impact on the cost of production”.

Research by the BPC revealed the poultry sector lost more than 10,000 staff in 2019, representing more than a quarter of its workforce of 38,500. As the UK had not yet left the EU, the sector was able to fill those vacancies, Griffiths said. But the cost of employment had since increased dramatically, with a further 10,000 job shortages expected this year. Filling those vacancies was expected to cost the sector a minimum of £15m by the end of 2020.

The BPC has previously warned similar employment conditions under a no-deal Brexit could add up to 25% onto poultry prices “In most areas, the unemployment rate remains negligible (1- 2% in the areas we operate), which means we have vacancies that can’t be filled by British workers,” Griffiths said.

“We are doing everything we can to move away from reliance on immigration,” he added. “Our businesses are investing in staff ­retention, productivity, technology and automation.”

However, he stressed the lead time for such changes of between three to five years “can’t keep pace with the labour shortages”.

The BPC is calling on the government to back its drive for innovation and to sponsor the development of a ‘Food Productivity and Automation Allowance’ which can be used to support automation through the provision of fiscal allowances and financial support, Griffiths said.

“This will help unleash our potential and help British food production flourish post-Brexit.”