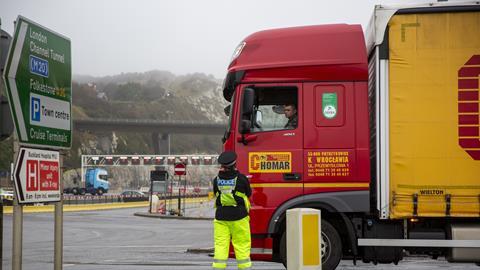 There was a palpable sense of relief emanating from the British food industry last week after the government announced a further six-month delay to the introduction of import border checks. The move had come, breathed one commentator, “in the nick of time”.

With customs systems and port infrastructure still some way off completion, there were serious concerns that plans to implement full border checks on 1 July would have left supply chains in disarray and businesses struggling to cope.

The new schedule means border checks will not begin until 1 January 2022, buying much-needed time to finalise the necessary preparations. So is it a problem solved? And how should businesses make the most of the extra time?

British ports are among those most relieved by the delay. Since the start of the year, ports such as Portsmouth have regularly sounded the alarm that critical border control posts would not be ready by the summer, making it impossible for them to carry out the full range of checks.

This week, despite murmurings of irritation from some ports at yet another delay, most are breathing easier thanks to the additional time, says British Ports Association CEO Richard Ballantyne. “For the ports themselves, everything should be ready [by January],” argues Ballantyne. “The question is: will everybody else be ready?”

The question applies not just to British systems, but European players as well. EU vets, for example, are set to see a significant increase in workload. From October, all goods of animal origin, such as meat and cheese, will require health certificates signed off by a certified veterinarian before entering the UK from Europe. According to Richard Burnett, CEO of the Road Haulage Association, EU vet numbers “still fall far short of what’s needed”.

The issues go beyond capacity constraint. Just as border officials in different EU countries have made different interpretations of the new rules – some rejecting paperwork due to pen colour, for example – vets could prove equally inconsistent in their demands. Until now, food companies importing from numerous European countries have only had to deal with vets in Britain.

“The official vets in the Netherlands are probably not going to behave exactly the same as those in France or in Spain, for example,” says Chris Tyas, chair of GS1 UK and acting director of food supply for Defra’s Food Resilience Industry Forum.

1 January 2022: Physical checks to begin at the border, including on animal and plants products, along with requirements for safety and security declarations

Tyas is urging businesses to use the newly granted months to learn from their European suppliers how they expect their country’s vets to act, making suitable adjustments as necessary and, crucially, in advance.

The additional time will be particularly precious to SMEs, of whom almost half made no Brexit preparations at all, according to an Aldermore survey in December. Forty-three per cent of small food businesses attributed their lack of planning to the disruption of the pandemic, though some trade bodies believe many had not fully grasped the scale of change about to occur.

Tyas is keen to impress on businesses of all sizes that the next nine months must be used to address any such shortfalls in preparation. “Use the extra six months sensibly. There is now time to prepare. But start now. Don’t wait for another cliff edge in the hope of another postponement,” he warns.

However, not everyone is happy about the new deadlines. Exporters argue they will now face unequal treatment compared with their EU counterparts for at least a year, after Brussels implemented full border controls on 1 January.

“We are not being allowed to compete on a level playing field with EU producers, who are gaining a clear competitive advantage,” says Charlie Dewhirst, senior policy adviser at the National Pig Association.

And they could be forgiven for worrying that the latest delays may not be the last. The government has now twice delayed implementing the full controls, having first pushed them back from 1 January last year, a pattern that has not gone unnoticed.

“The message the industry has been given is the government will continue to push back the deadlines if they’re not confident they can implement the border in a disruption-free way,” says Shane Brennan, CEO of the Cold Chain Federation.

While ports now have more time to build infrastructure, and the distraction of Covid for businesses will hopefully ease, there remain questions over the readiness of the much-discussed government customs system, intended to simplify trade.

The government pledged last year that its new border IT system – the Goods Vehicle Movement Service, or GVMS – would enable trucks to declare goods ahead of reaching the border, allowing smoother traffic flow, particularly at busy ports such as Dover.

GVMS is already in place for Northern Ireland and an HMRC spokesman says it is “working well”, adding the government is “confident in its capacity to handle increased demand” from January 2022.

But freight software suppliers claim recent meetings over the implementation of the systems have been suspended following a restructure within HMRC, leaving them unclear about the systems’ progress.

“If it was still going to full controls by July, the fact we’ve had all these meetings rescheduled would leave me starting to get a bit worried,” says Steve Bartlett, chairman of the Association of Freight Software Suppliers. “Which makes me think maybe they are not ready themselves internally.” HMRC deny any meetings have been cancelled.

Any issues with the software is a concern because “all bets are on having an effective IT system for customs that reduces visibility at the border”, says Brennan. Until that is in place, the government will hold back on implementing full import checks, he believes.

“And the problem with that is, it doesn’t exist yet and they have no idea whether they can deliver on the ambition of the scheme they have in mind within this timeframe.

“That’s why they talk about 1 October with this phasing-in period. That is entirely based on a hope they can build the IT in time. But they can’t bank on it for sure.”

A source at one major supermarket tells The Grocer: “The best food retailers and suppliers would have been ready for the deadline. It’s absolutely apparent from that [delay] announcement that the customs systems weren’t ready. It doesn’t matter how well prepared we were – a snarl-up at the ports would have been an issue, so I would say it’s a relief for the industry.”

So the question remains: can the systems be ready in time for the new deadline?

This article is part of The Grocer’s Supply Chain Special