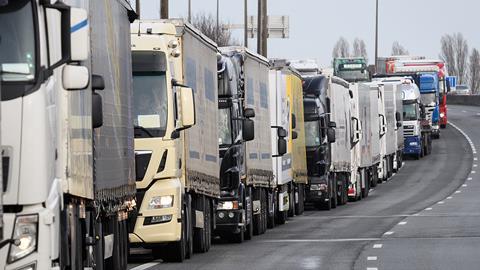 The industry is better prepared, with alternative routes and extra storage among the solutions

German food producers might stop sending food to Britain rather than get caught up in post-Brexit bottlenecks. That’s according to diplomatic sources speaking to Buzzfeed last week, who said the warning was issued during recent meetings between officials from the country’s agriculture ministry and the British Foreign Office.

It came after leaked government documents revealed freight trade flow through Dover and the Channel Tunnel could fall to 40%-60% of current levels after a no-deal Brexit, with delays and disruption to EU shipments potentially leading to fruit & veg shortages in the UK (see box).

So what are the UK’s fresh produce importers doing to prepare for the worst-case scenario? And how confident are they that they can protect supplies and avoid price hikes?

There is no doubt the UK is highly reliant on fresh produce from the EU. Currently, around 40% of our fruit & veg comes from the EU, with Spain, the Netherlands, Italy, France and Germany key exporters.

So the reported threats from German officials are a worry. But UK importers are confident most European growers will continue sending fruit & veg to the UK after Brexit. “The guys we’re dealing with in Europe are keen to keep on supplying us, so that’s a positive,” says Andrew Gilding, MD of fresh produce importer Peter Gilding.

“This is something we’ve been working on since the referendum”

“All our major growers are dealing with the supermarkets so they’ll want their product to come into the UK,” agrees Jonathan Olins, MD at Poupart Imports. “There is a lot of things we still don’t know about tariffs, costs and delays, but they can’t ignore a market of over 60 million people.”

The conclusions of the government’s leaked Operation Yellowhammer dossier are more concerning. Fresh produce is “highly perishable and so very susceptible to the impact of any delays at the border coming into the country”, says Fresh Produce Consortium communications manager Sian Thomas.

However, they came as no big surprise to the industry. “This is something we’ve been working on since day one of the referendum result, knowing there was a potential for the UK to leave with no deal,” Thomas adds.

What’s more, while the delayed October deadline means Brexit falls at a more crucial time for fruit & veg imports, most of the industry is more prepared than it was back in March, Thomas suggests. “We are also hearing that the French authorities feel more confident that they’ve got more things in place on their side of the Channel.”

The Grocer reported in February that Tesco partner G’s Group had implemented plans for a UK “import hub” away from the “heavily congested” south east, with ports in the north east under consideration.

Since then, more fresh produce companies have been exploring alternative routes, says Thomas. “We have been encouraging members to move away from where we know there are hotspots on the south coast,” she says. “They’ve also been working with ports who are doing their utmost to ensure things can run smoothly.”

Among them is fruit & veg wholesaler Reynolds, which has been exploring “every eventuality to get product into the UK”, including alternative transport routes, says head of marketing Andy Weir. “Rotterdam into Felixstowe is one option”, he says.

There are downsides to using different ports, though. According to Peel Ports commercial director Stephen Carr, shipping directly from Bilbao to Liverpool takes between 24 and 36 hours longer than equivalent road journeys through Europe via Dover.

“All of the other routes take more time,” agrees Weir. “And when you are talking short shelf-life products like lettuce or berries, any time they spend on the road or on a boat in transit means we get less shelf-life when it gets here.”

What did Operation Yellowhammer say?

Indeed, while Peter Gilding imports some fresh produce from Belgium and Holland through Hull, a “big percentage” of its fruit & veg is still coming through Dover, says Andrew Gilding.

Working on the basis that there “may be a delay of a couple of days”, the company plans to mitigate disruption to customers by ordering “a bit more fruit in advance than we normally do”, he adds. “We can have stock because we’ve got a cold store in Liverpool.”

The wholesaler hopes to spread the risk by having two or three suppliers at its disposal, Weir adds. “If we do see major disruption, it’ll be about being fleet of foot and not having a rigid supply chain that simply cannot move. We need to have that flex there if we need it.”

Poupart Imports already has an office in Spain and “strong connections with transport companies”, which should protect it against the worst delays, suggests Olins.

He agrees flexibility will be key to preventing shortages. “We have an extensive range of products, which should help because if we are short of a certain product we will have other things to offer our customer.”

In general, the fresh produce industry is already “very resilient and flexible”, says Thomas. “We are used to having to switch supplies for different reasons.”

A few years ago, for instance, the industry faced shortages following bad weather in Spain, and ended up air freighting produce from the US to prevent empty supermarket shelves.

However, these options are inevitably more expensive, notes Weir. “We’d be effectively incurring an additional cost that we or our customers have to pick up.”

Gilding also warns that while his company is working hard to protect against shortages, pricing is out of his hands.

“I’ve no control over exchange rate, over duty. The only thing I can control is us having good co-operation with our suppliers and also our transport companies.”

So while importers are doing their utmost to ensure fresh fruit & veg still reaches shelves in the worst-case scenario, getting it on the table is likely to come at a higher price.