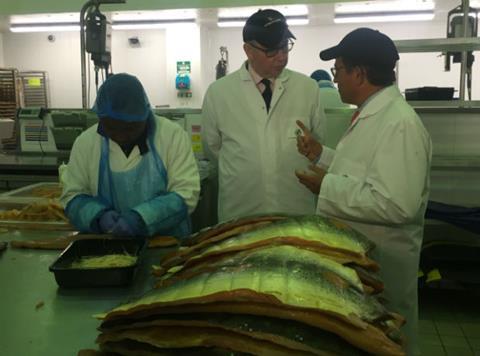 Defra has remained tight-lipped on the future of Protected Geographical Indication status in the UK post-Brexit, despite the environment secretary attending a PGI award ceremony at a London-based salmon smokehouse this week.

“I am delighted the European Union have said that within these three boroughs smoked salmon is produced to a high standard than anywhere else in the world,” he said. “And that as a result, wherever you are if you’re a restaurant entrepreneur in Shanghai, if you’re a consumer in the United States, if you want absolutely the best smoked salmon then you will know with absolute assurance that London cure is it.”

However, Lance Forman, owner of H Forman & Son, said the minister had offered no reassurance over whether the new status would continue post-Brexit.

“I don’t think anyone can reassure anyone because it’s something that hasn’t been discussed. Only time will tell,” he added.

Currently, there are 84 foods with PGI status in the UK, which gives producers protection around the marketing of their products and is highly valued as a stamp of quality and provenance in the EU and beyond.

If the UK does not introduce an equivalent scheme after Brexit there is a risk previously protected products could be replicated anywhere and by any process, because the UK has no laws that protect geographical intellectual property.

“Producers that export to Europe are very concerned because at the moment protected food name status is a sort of entry. It allows conversations with retailers in Europe who know it’s a quality mark,” said Dr Matthew O’Callaghan, chair of the UK Protected Food Names Association.

The Association is pushing Defra for a scheme that would be recognised by both the EU and the UK, such as the EU’s agreement with Columbia which allows Columbian coffee to have protected status in Europe, and European products in Columbia.

It is due to meet Defra on 26 July and O’Callaghan said he was “hopeful” of an agreement. However, Defra would not comment on the issue when approached by The Grocer.