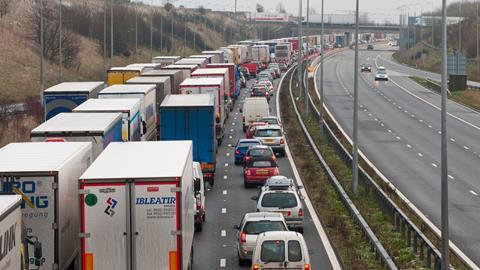 With EU trade deal negotiations kicking off in two weeks’ time, a report by the BRC has warned that without the right outcome, the industry faces chaos at the ports, food shortages and price rises.

So what does the government need to do to avert disaster when the Brexit transition period ends on 1 January?

Escaping Brussels bureaucracy was supposed to be one of the big Brexit draws, but the industry risks being buried in an avalanche of new red tape.

Among key concerns is the issue of export health certificates, which would be required for products of animal origin. The BRC warns certain products face a ban on exporting to Europe, including sausages, which like other goods termed a ‘meat preparation’ currently have no equivalent system of certification for trade in Europe.

There is also a “massive issue”, it says, for products containing fortified flour, which though allowed under the UK’s membership of the EU, would be barred once we leave.

More fundamentally, however, the ‘just in time’ supply chain simply cannot afford a raft of physical checks, especially as 1 January could also herald VAT and excise, freight and customs declarations, and the need for safety and security permits.

There is hope. Other countries have already secured export certificate deals with the EU. By agreeing so-called “equivalence” arrangements, it allows them to dial down the use of physical checks for EHCs. It means just 1%-4% of imports from New Zealand face inspections and 10% of those from Canada. Industry bosses are urging the government to negotiate something similar, but on a much wider scale.

2. Come up with a tariff system that protects producers without putting up prices

Temporary tariffs drawn up to protect businesses and prevent price rises in the event of a no-deal have, like the idea of frictionless borders, bitten the dust.

They would have meant nearly 90% of imports to the UK by value would have been tariff-free, while tariffs would have remained on beef, lamb, pork, poultry and some dairy products.

But now the government has launched a new consultation on plans for tariffs, due to be published next month.

The BRC calls for “zero tariffs” with its political adviser William Bain saying it would be a “disaster if we get to September and we were still negotiating”.

But this week chief Brexit negotiator David Frost warned Brussels the UK would not accept the EU’s call for “level playing field” regulation in the talks. It could be a hammer blow for any zero-tariff deal, as could the row over EU fishing rights. Failure risks exporters to Europe from the UK facing tariffs of more than 40% on some beef cuts and cheese types. On the other hand, no-deal tariffs were themselves subject to huge controversy. Some claimed zero tariffs on imports such as eggs and cereal grains would have been a disaster for UK farmers.

As a compromise, the FDF has called for tariff reductions to be phased in over a period of years or managed with quotas - as well as subsidies to help disadvantaged UK producers.

3. Get the ports ready to avoid gridlock on 1 January

The race is on for ports to be ready for hard borders when the transition period ends.

No longer will trucks simply be waved through the border, as they would under previous no-deal plans. And with nearly 7,000 lorries passing through Dover every day, ministers admit it could take five years before the system - including new IT solutions - is fully functioning.

“We are urging the government and the EU to have flexibility”

The BRC says it wants the government to “negotiate away” as many checks as it can, not just at Dover but at Holyhead, Stranraer and other ports.

“We are urging the government and the EU commission to have flexibility,” says Bain.

“The worst thing would be to bring in new controls and processes precipitately only for them to fail on day one, or even day 100.”

Some still hope to persuade the government and the EU to agree to a gradual phasing in of checks, allowing the gradual development of new IT systems - but how this would square with the “taking back control” rhetoric the government is conveying is unclear.

4. Pen a haulage deal that allows lorries to flow

Today British and European lorries criss-cross borders without controls, but this is under threat from 1 January. Without an agreement, British drivers will be required to apply for a European Conference of Ministers of Transport permit for every international journey, as will European drivers entering the UK.

But the permit system is not designed for the huge levels of trade that cross the English Channel. Permit numbers are restricted by national quotas and are only expected to cover 5% of UK exports into Europe, according to analysis by the Road Haulage Association.

The EU has signalled there could be rules restricting drivers to just three foreign journeys within seven days before having to return home. That could mean “you would not have the flexibility that allows for just-in-time supply chains or for fresh produce in your supermarkets”, says Sarah Laouadi, European policy manager at the Freight Transport Association. “You may have empty shelves because deliveries don’t arrive on time.”

In its draft negotiating mandate released this month, Brussels said a deal should “establish open market access” for road freight transport, but British truck operators “should not be granted the same rights and benefits as those enjoyed” by EU operators.

Failure to secure a deal could be disastrous for haulers and retailers alike.

Amid no-deal fears of six-day queues into Dover and 17-mile tailbacks, the government has already looked at moving border checks away from the ports.

This could see many border inspections, including customs and safety and security checks, conducted elsewhere.

“If the border is at Dover there will inevitably be delays, whereas inland it can be seamless,” says Rob Hardy, founder of the Customs Clearance Consortium.

“A load can come into the UK with an EU health certificate and go straight to its destination to be checked.”

Under such plans, key ports would only be required to maintain a ­border inspection post for animal products.

Environmental health officers and vets will already be required at many processing sites, and could be employed to check imports.

EU law allows checks “at a place other than the point of entry into the community or at a place close by”.

But some fear having checks away from the border could also be costly and confusing.

It would also not be appropriate for all sectors. Sam Coldicutt, international trade lawyer at Linklaters, points out it is unlikely that sanitary and phytosanitary (SPS) checks, for example, would be made away from the border. “You don’t want to have the risk of some sort of pest or contaminant getting into the countryside”.

Regardless of any trade deal, the following requirements are on the way: