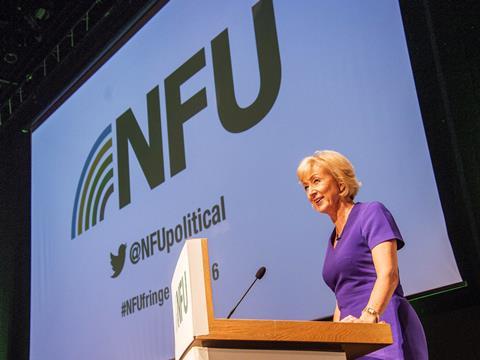 UK food and drinks suppliers should be doing more to trade with China as the UK gets set to begin the process of exiting the EU, Defra secretary has told an export forum this week.

The industry needed to step up the challenge of cracking the Chinese market if it was to benefit from the “huge rewards” on offer. The secretary of state said in a keynote address to the Food & Drink Exporter’s Association (FDEA) network forum 2016 on Wednesday.

However, critics in the audience accused the government of being naïve and spelled out the difficulties of breaking into China.

Leadsom added that she was “overwhelmed by the sheer enthusiasm” in China, during her first visit to the country in November, for British food and drink products

However, the minister warned that UK companies were not doing enough to keep up with the demand from China.

“[At a roundtable event in China] it became clear that demand is often outpacing supply,” she told the delegates at the FDEA forum. “Some organisations have found it harder than expected to tap into markets, and remain unable to find a way in.

“And although it can be a difficult market to break, and there will be some initial challenges, the economic prizes are huge.”

Leadsom launched an ambitious food and drink action plan in October, aiming to boost exports by £2.9bn in the next five years across nine key markets across 18 countries, including China – which is targeted for an extra £405m in overseas trade by 2020. The government is also negotiating to gain access to the lucrative Chinese market for British beef.

Walkers Shortbread MD Jim Walker, who gave a speech at the FDEA event on an exporter’s view of Brexit, highlighted the difficulties in exporting to China.

“We’ve [Walkers Shortbread] been there 20 years, trying to sell but there are problems,” he said. “It’s twice as tough as any market because everyone’s there knowing how big it is, but I wouldn’t go there as a novice, that’s for sure.”

A source at the event who asked to remain anonymous added: “It’s hard enough for Diageo, and they are a giant, let alone someone who has never exported before. The cultural change you will encounter is as different as night and day.”

Lee Hemmings, head of Asia Pacific and North America at crisps maker Tyrrells, which exports all over the world,

“We’ve exported there [China] and you will encounter every conceivable problem imaginably – and we have. However, if you are persistent, you can overcome those problems and the market is a very lucrative one.”

Walker also argued that the opportunities for exporting associated with the weak pound are overplayed. “The list of recommended target countries to compensate for Europe has several with faltering economies, not potential markets for quality British food,” he said.

“It appears that the pound will be both volatile and vulnerable. It is much better to be exporting with a stable currency rather than on the back of a pound which is weak because of a faltering economy.

“A weak pound in itself is not a sound basis to develop a long-term export business.

“Every food manufacturer knows that it takes a great product and many years of effort and hard work to become an overnight success.

“Every exporter (whether they play golf or not) is well aware of the efforts and continued commitment needed to keep exports growing and we all know that to export effectively is quite simply to overcome an unending string of problems and challenges.”

Leadsom also said in her address that food and drink suppliers, alongside the government, were responsible for upholding the industry’s place as the largest manufacturing sector in Britain once the country leaves the EU.

“As new doors are opened, and we’re given trade access, we want products ready to roll when those deals are secured – that includes the negotiations taking place right now for beef and lamb exports to China and the US,” the secretary added.

“But, we do need more vanguards to step forward to start those initial conversations, and show us they’re ready to step up to the challenge.”