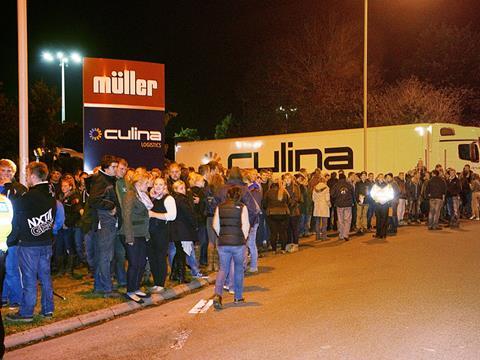 To say things are fraught in UK dairy at the moment is an understatement. Farmgate milk prices plummeted by an average of 9.4% [DairyCo] between last November and August this year (and have fallen further since), and dairy farmer protests are once again back on the national agenda: this week, Farmers for Action (FFA) targeted Müller and Morrisons with protests.

The milk price cuts and protests come against a backdrop of extraordinary turmoil in the global dairy markets. The wholesale price of European skimmed milk powder has fallen by 39% year on year, and by 13.1% in just a month, while other dairy commodities such as whey powder (down 17.3% year on year), and butter (down 32.6%) have fallen by similarly alarming rates [Mintec].

On top of that, the Russian import ban has created further volatility. Experts agree the situation is as bad as it was during the SOS Dairy protests in 2012 - if not worse. So what is the industry going to do about it?

Many experts believe balancing supply and demand has to be a priority. The current slump in prices has been partly brought about by unusually strong milk production in the UK this year. Farmers produced some 9.3% more milk compared with this time last year [DairyCo], putting downward pressure on prices.

Farmers will have their own part to play as the industry as a whole “needs to adapt to market forces,” says consultant John Allen of Kite Consulting. Improved forecasting by producers to ensure they don’t over-deliver could be one way of stabilising the market in the long term, he adds.

Even FFA chairman David Handley concedes some farmers need to “think about supply and demand issues.” FFA has proposed a new pricing formula as a solution to the current impasse. It claims this would offer farmers more transparency over contracted supplies, and would pay a second ‘B’ price to farmers on any over-supplied milk, which would be linked to market conditions.

The idea is fairly basic at this stage, but industry expert Ian Potter says he hopes processors and industry bodies like DairyCo and the National Farmers Union will help FFA flesh out its proposals, while urging retailers to “buy British dairy products where possible” and reconsider their pricing.

“If supermarkets want to offer cheap milk to consumers that’s their choice, but the issue is that supermarkets rarely, if ever, stump up the money to support the discount.”

The processors themselves are also busy exploring how they can work better with farmers to avoid price shocks caused by a mismatch between demand and supply.

Müller this week said its farmer representative group, the Müller Wiseman Milk Group Board, was investigating ways of mitigating the problem of falling farmgate prices. This would involve greater collaboration with farmers over how they forecasted production levels to avoid what CEO Ronald Kers described as milk production levels “above even the most optimistic forecasting of our farmers.”

Morrisons - which was targeted on Wednesday by FFA - says it agrees “that new mechanisms to help the industry cope with volatile price movements must be developed.” It adds it is committed to developing more transparent pricing, as first trialled on a First Milk cheese contract last year, which removed “some price volatility.”

Meanwhile, Dairy Crest says it is “encouraging more farmers on to its formula contracts” and offering a consultancy service to all its suppliers to assist in forecasting, while Arla says it is seeking new markets for its milk in the developing world.

The last point is crucial. Regardless of how these protests plays out, farmers are increasingly part of a global market, and that comes with new responsibilities. As Allen puts it: “Farmers will have to be more accountable about what they deliver.”