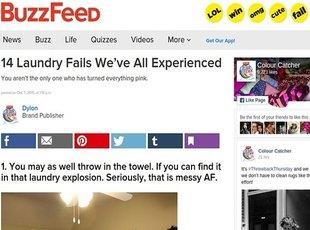 Buzzfeed and Dylon have had their wrists slapped by the Advertising Standards Authority over a recent advertorial.

The regulator ruled today (13 January) that the news and entertainment website’s article for the clothes dye brand was insufficiently flagged as paid-for content.

The online ad was styled as a typically comical BuzzFeed list, featuring photos and social media posts highlighting 14 ‘laundry fails’. The logo for Dylon’s Colour Catcher product also appeared prominently, along with a live feed from the brand’s Facebook page. A message at the bottom of the web page read ‘It’s at times like these we are thankful that Dylon Colour Catcher is there to save us from ourselves. You lose, little red sock!’

But the ASA decided after consideration that the item was misleading because visitors who arrived via routes other than the website’s clearly marked homepage and search function might not realise they were reading advertising copy.

The regulator also noted the page was very long, meaning Buzzfeed readers would not have seen the reference to Dylon Colour Catcher at the foot until after they had engaged with the content.

The ASA said the article must no longer appear online in its original form. Dylon owner Henkel Ltd and BuzzFeed UK Ltd were instructed to ensure future promoted content was easily identifiable as marketing communications.

“BuzzFeed has worked with numerous brands to publish high quality branded content,” said Claudia Jungmann, brand manager at Henkel. “The site has advised us that it has contacted the ASA to further discuss this decision and to work with it to develop and implement best practice.”

Buzzfeed added: “We’re always testing and iterating our ad products, and will be reviewing the guidelines accordingly.”

The site was more transparent than many other media companies in the way it has labelled native ads, according to Brinsley Dresden, head of advertising at law firm Lewis Silkin. The “average consumer with a bit of common sense and intelligence” would understand that BuzzFeed advertorials were marketing communications, he said.