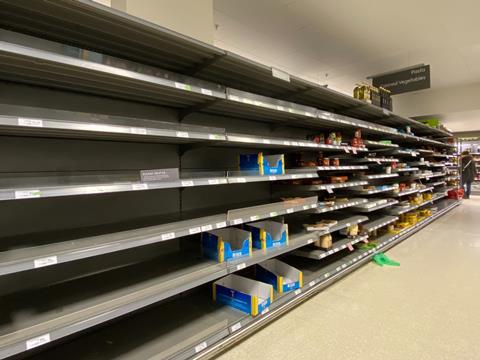 Locked-down Brits with gluten allergies are struggling to get hold of essentials such as pasta, bread and flour.

Charity Coeliac UK’s CEO Hilary Croft told The Grocer this week it had seen a 500% increase in the amount of calls to its helpline since the crisis took hold, with 25%-30% of those calls about not being able to procure gluten-free food.

Croft said supply issues were “particularly compounded for the coeliac community”, as shoppers who wouldn’t usually buy gluten-free products were switching into the category if they couldn’t find their regular purchases.

Meanwhile, product restrictions over the weeks since the crisis hit meant families with gluten-free and gluten-eating members were struggling to get hold of enough to feed themselves adequately, she said, adding the charity had raised this as an issue with Defra.

“You’ve got to look at gluten-free as a separate category so that people can buy enough for their whole family,” said Croft.

A Warburtons spokesman told The Grocer it had experienced “an unprecedented spike in demand for gluten-free products” in the four weeks preceding the lockdown, and while this had begun to flatten, it was “still seeing strong growth vs pre-crisis levels”.

Doves Farm, meanwhile, said it was still experiencing unprecedented demand, and had launched a gluten-free food box that it sells via a direct to consumer platform.

“Finding safe and suitable meal and snack solutions in normal times is already harder for these individuals as product choice in store is more restricted. In times like these, it can be extra challenging,” said its founder Clare Marriage.

Supply issues do appear to be slowly resolving - many SKUs were beginning to come back into stock across gluten-free bread, baking and pasta categories this week, latest Edge by Ascential data revealed [52 w/e 27 April].

However, several Doves Farm gluten-free flour SKUs are still showing out of stock in both Sainsbury’s and Morrisons, as well as four out of nine Sainsbury’s own-label gluten-free pasta SKUs [Edge].

A Sainsbury’s spokesman said the supermarkwet was still restricting items including pasta, but stressed its free-from ranges were well stocked.

Edge data does not show any large gaps in stock in Tesco or Asda over the last month. However, some shoppers complained they had experienced gluten-free items being substituted for gluten-containing ones when shopping online with Asda.

One Twitter user (@ThisIsBarre) said Asda had “substituted half my gluten free food for gluten options, which I can’t eat” while another (@jaysue190) said a gluten-free pizza was swapped for a gluten-containing one. “Why did it get changed to something that will make me ill?” she said.

An Asda spokeswoman said its “aim is to deliver the absolute best service for our customers day in, day out, and for the vast majority of the tens of millions of people who shop with Asda online every year - we do just that.

“When it comes to substitutions, our colleagues will always do their best to offer a suitable alternative, but we accept that sometimes mistakes are made.

“If a customer is ever unhappy with a substitution we will of course refund this and they don’t have to accept the item. Our customers also have the option to opt out of receiving substituted items, so if an item isn’t available they simply won’t receive it and this would be reflected in the cost of their order.”