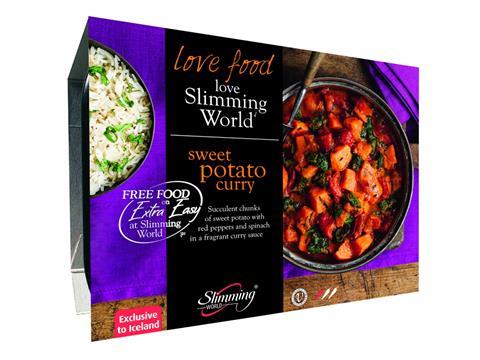 The retailer says the range will pass the £100m mark in the coming months, a feat that would put it well within The Grocer’s ranking of Britain’s 100 biggest brands were it not a retailer exclusive.

“It’s helping to drive the public’s re-evaluation of frozen food as both natural and healthy,” said Iceland head of product development Neil Nugent. “We not only have exclusive rights to sell the meals but also develop them with Slimming World and make them in our own facility in Manchester; it is a perfect, vertically integrated partnership.”

The 12-strong range includes dishes such as Mediterranean-style Chicken Sausages and Hot-smoked Salmon Farfalle and sells for £1-£3 per pack.

“The big shift we’ve seen with consumers and health is both a return to healthy eating aspirations and a move towards ‘good in’ rather than ‘bad out’ messaging around natural calorie-counting,” said Kantar analyst Adam Gilham. “Slimming World taps this trend with its aspirational, healthier branding and affluent, primarily female target.”

The Slimming World range is now worth double its closest branded frozen ready meal rival, Bisto, which achieved sales of £31.1m in 2015. The overall frozen ready meal market has achieved growth of 2.3% to £479.1m on volumes down 3.1%, driven partly by the development of more premium, health-orientated offerings.