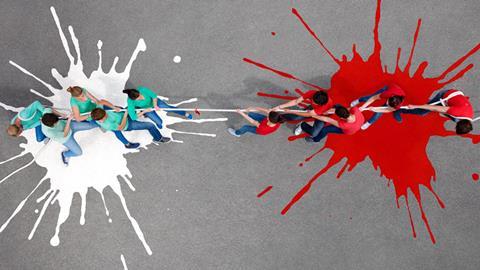 The giants are battling it out in mayo as new craft brands look to spice up sauces. But who’ll still be standing after the price war?

There’s a tug of war going on in table sauces. On one side is Heinz, heaving with all its might to win more share of mayonnaise, Britain’s fastest-growing sauce sector. On the other is Hellmann’s, digging deep and diversifying in the face of stiffening competition.

But there’s a twist to this contest. As the two giants battle it out, a growing number of smaller craft players and restaurant brands are threatening to cut the rope. With restaurants closing again in areas under local lockdown and suffering from falling trade where they’re still open, consumers are increasingly turning to flavours you’d associate with a meal out. So, who’s winning?

It’s actually quite hard to find any losers, if you’re defining success or failure simply by looking at sales figures over the past year. Sunny weather in spring, a hot summer and, of course, lockdown were great news for table sauces. The combination prompted more people to barbecue and cook at home, driving substantial growth for most of the big sauce brands.

Restaurant brands are the first big winner in this equation. With foodservice off limits for many, shoppers are looking to recreate the out-of-home experience. And brands are building on that advantage. After the retail launch of Nando’s Vegan Perinaise in January, April saw the launch of Nando’s Garlic Perinaise to tap growing demand for flavoured mayo.

“It made total sense,” says Sophie Lindfield, senior brand account manager for All About Food, which manufactures and distributes sauces under established high street brands including Nando’s, Pizza Express and Wahaca. “Garlic is the second most popular flavour of peri-peri in restaurants and the second-biggest segment within flavoured mayonnaise, behind chilli.”

That has helped Nando’s deliver one of the highest percentage gains in the top 10 sauce brands, up 36.1% to £30.9m [Nielsen 52 w/e 5 September 2020]. It’s not the only restaurant brand cashing in. Lindfield also points to strong growth for the Pizza Express range of dressings, which are up 27.2% or £1.1m. “Pizza Express’ growth has been driven by attracting new shoppers to the category,” she says. “Penetration has increased by 36.4%.” 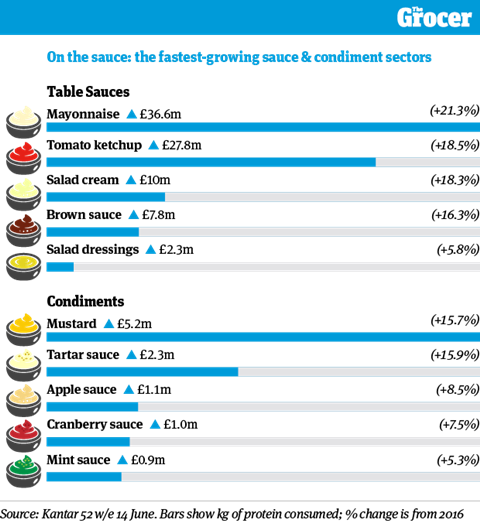 Of course, the success of this pair isn’t all down to the pressure restaurants are under. People eat more salads when the weather is warmer, after all, and retailer ranges have been expanding for some time to reflect growing demand for world flavours such as the signature Nando’s peri-peri spice.

Which explains the second big winner: adventurous sauces. “People are much more ‘travelled’ or ‘worldly’ and are looking to recreate the flavours and experiences they had on their travels,” says Rick Panesar, founder of the startup 2 Fingers, which produces a range of chunky tartare sauces, including Creole and Vegan lines. The brand’s Wasabi variant has been enjoying 50% month-on-month growth since July, says Panesar.

That kind of growth isn’t unusual in this end of the market. Hot sauce player Dr Trouble has seen sales of its African Lemon Chilli Sauce rise by more than 800% since July. Nielsen’s numbers reveal particularly strong performances from the likes of Blue Dragon, Frank’s Red Hot, Tabasco and Heinz-owned Bull’s Eye BBQ Sauce, among others. Essentially, hot sauce is hot stuff.

“Mayo, hot and spicy sauces, modern condiments (chilli and bacon jams, beetroot ketchups and the like) and barbecue sauces are growing fastest with the barbecue season helping through lockdown,” says Nielsen senior analytical executive Nicholas Corlett. “Heinz has benefited most from this, thanks to its broad product range, although Hellmann’s has returned to growth through mayo since Covid.”

That brings us neatly to the ultimate winner of the past year: Heinz. Its 21.5% value gain was worth a staggering £43.9m at the tills – the greatest absolute gain in the top 10 by far – while volumes grew 12.4% [Nielsen].

Those figures, of course, denote a rise in average price. That’s down to two things. First, the launch of lines such as the posh trio of flavours added to its Seriously Good mayo range back in July – Garlic & Caramelised Onion, Rich & Creamy Truffle and Lemon & Black Pepper.

Because posher, of course, means pricier. Heinz’s flavoured variants sell for upwards of £8 a litre, depending on the pack size. That compares with an average of £5.29 across Hellmann’s and Heinz’s portfolios [Edge by Ascential 26 w/e 11 September 2020 – Tesco].

Second, Covid has put a dampener on the promotions that have characterised the sector, especially in the battle between Heinz and Hellmann’s. “Prices have increased, driven predominantly by reduced promotions,” says Kantar analyst Lucy Pollock. “This reduction is seen across the board, but most keenly in Tesco and Morrisons.”

Still, the prospect of paying more doesn’t seem to have deterred shoppers. Heinz junior brand manager Maria Pérez de Ayala partially attributes this to the pressures of 2020. “With measures put in place to keep the public at home, navigating new ways of shopping and widespread stock shortages, shoppers purchased the products they love,” she says.

To prove the power of a strong brand, Pérez de Ayala points to the 27% growth of Heinz’s Seriously Good mayo over the past year, giving it a 17% stake in the mayonnaise market [Nielsen 52 w/e 5 September 2020]. Not bad for a brand that is only four years old.

“With measures to keep the public at home, shoppers purchased the products they love”

With Hellmann’s up 19.5% on volumes up 19.9% over the same period, it seems Heinz is winning the great table sauce tug of war. Indeed, all of Hellmann’s growth came from the final six months of that period, driven by peculiar circumstances arising from the pandemic and the good weather. In the six months to February, the brand actually saw sales slip by 2.3% in value terms.

“Hellmann’s was in decline before Covid-19 kicked in, despite some innovations,” says Nielsen’s Corlett, pointing to the now axed Big Night In range of takeaway style sauces (Mexican, Kebab, Pizza and Chicken) and a trio of vinaigrettes. “The impact of other brands on Hellmann’s core product – mayo – is showing, with the likes of Heinz and Nando’s growing with spice and flavour. 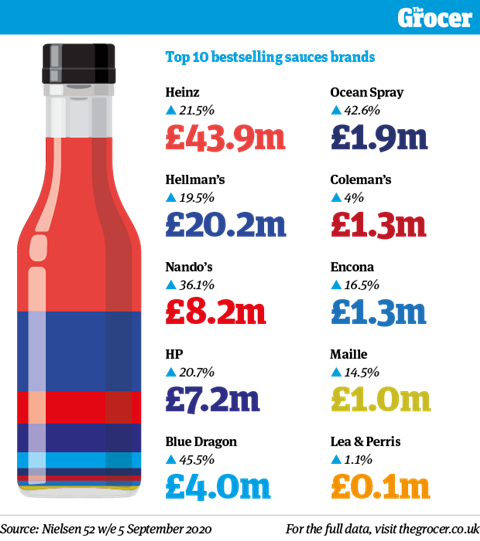 Unilever marketing director Fikerete Woldegiorgis concedes that the weather was a key driver of Hellmann’s return to growth from March onwards. “With a million more BBQ occasions this year due to people staying in and enjoying their gardens, barbecue season was a huge hit,” says Woldegiorgis.

“And no barbecue is complete without a selection of sauces, which is why at Hellmann’s we’ve experienced huge growth this year, cementing our position as the market leader in the mayonnaise category with a staggering 51.4% share,” she adds, quoting Nielsen numbers.

“With a million more occasions, barbecue season was a huge hit this year”

But the growth wasn’t all down to a bumper barbecue season. “By launching Hellmann’s Vegan Mayo back in 2018, we led the way in changing perceptions of plant-based alternatives,” says Woldegiorgis, citing Nielsen data that confirms the line was the biggest mayo launch of the year. “We proved that vegan products are just as delicious. Demand is skyrocketing.”

Hellmann’s Vegan Mayo is also notable because it’s managed to keep its place on shelf for the two years since it was launched. Since the tug of war between Heinz and Hellmann’s began, there have been regular new product launches from both sides, many of which have failed to go the distance.

See the duo of ketchups launched by Hellmann’s in 2017, for example, which ended up going the same way as the aforementioned vinaigrettes and takeaway sauces. Heinz has also unsuccessfully tried to premiumise ketchup over the years. Back in 2012, the brand launched Balsamic Vinegar, Basil & Oregano and Roasted Garlic, Thyme & Honey ketchups in urn-shaped jars, which soon disappeared. Last year it had another stab with new Gourmet Ketchup lines.

It could do better this time around, as shoppers increasingly respond to pricier lines. Pollock points to Heinz’s Gourmet Ketchups and the expansion of Big Tom into ketchup as evidence of this premiumisation in this space. In mayo, the aforementioned new Heinz and Nando’s flavours, as well as growing listings for smaller restaurant and craft lines such as Leon Garlic Aioli and Tiptree Truffle Mayonnaise, are noteworthy.

These premium lines may prove a crucial mechanism for brands to drive value into the category. Because now the initial shock of Covid is over, they are under pressure from retailers to commit to EDLP. That’s particularly hard for a category that has traditionally been so reliant on deals.

“It will mean brands will have to work harder on recruiting and keeping shoppers and creating loyalty through innovation, engaging in-store and online, and communicating a strong brand story and USP,” says Flava People MD Scott Dixon, who’s already seen a 50% cut in deal frequency on its sauces, rubs and marinades.

Plant-based brand Rubies in the Rubble says it’s seen a slide in deals in Sainsbury’s, forcing it to rethink its in-store activation. “Waitrose hasn’t fully introduced this strategy yet, so we’ve been able to have twice as many promotions on ketchup since launch in July,” says CEO Jenny Costa. “Promotions are a brilliant way to recruit new shoppers.”

So brands will have to just think of a new way to recruit. In short, the great table sauce tug of war is about to get really interesting. 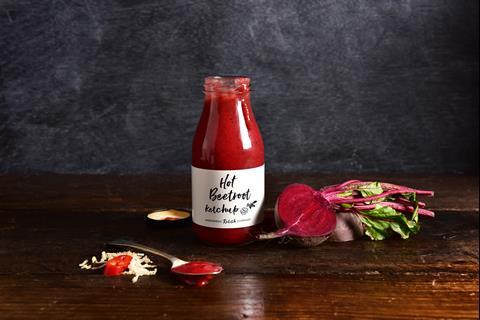 Hawkshead Relish | Launch date: September 2020 | Manufacturer: Hawkshead Relish Co | Hawkshead Relish has launched a range of four new products: Smoky Mustard Sauce, Spiced Mango Ketchup, Hot Beetroot Ketchup and Posh Pickle Sauce. Handmade in the English Lake District, they are available to buy online and at selected retailers across the UK. Each condiment has been crafted to help spice up casseroles, soups, or as an accompaniment to barbecued meats and fish – and are suitable for vegetarians and vegans. Rsp: £2.99 per 270g-305g jar. 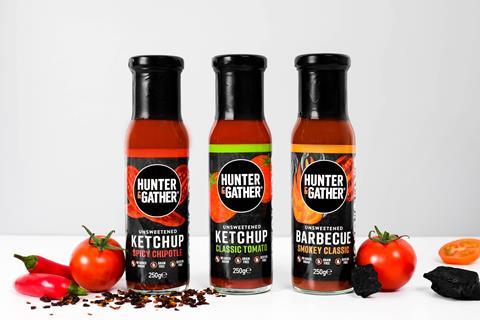 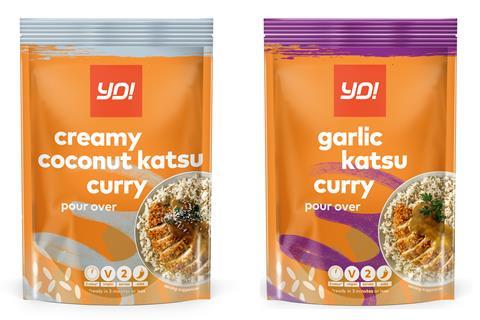 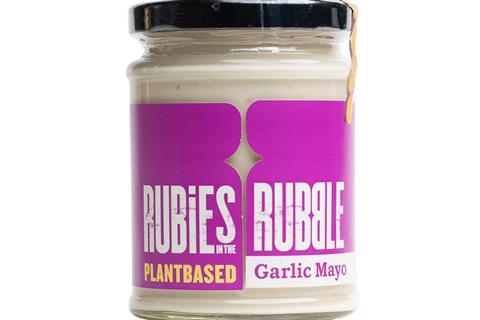