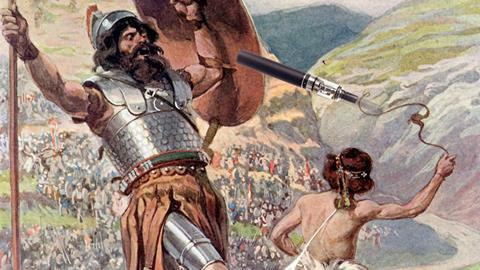 Brits are ditching cigarettes in favour of specialist vaping devices. That’s got big tobacco running scared and scrabbling to invest

No surprise, then, that big tobacco is taking note. Six years ago, it had no stake in the major vaping companies. Today, seven of grocery’s top 10 brands are owned outright or in part by tobacco giants [Nielsen 52 w/e 7 September 2019].

Those seven brands were responsible for nearly three quarters of the supermarkets’ £224.8m vape sales in 2019 and almost 85% of the channel’s growth.

Trouble is - for big tobacco, at least - the grocery channel’s share of the total market is tiny. Sales through specialist high street and online retailers, which offer a vast array of products from manufacturers from around the world, are estimated to be worth somewhere between £1bn and £2bn. Big tobacco is now viewing this sector with acquisitive eyes.

The Grocer can reveal that Philip Morris Ltd (PML), the UK arm of Marlboro owner Altria Group, has helped fund the expansion of VPZ, the UK’s largest chain of vape stores. In 2018, PML loaned the retailer £15m. Then, in January 2019, VPZ announced plans to almost treble store numbers to 300 by 2022 and expand into Europe. “Ultimately, it’s clear they will be bought out by PML,” a source close to the company tells The Grocer, though a PML spokeswoman says there are no plans to acquire VPZ “at this time”.

Such a move would have its precedents. In November 2018, British American Tobacco (BAT) bought Germany’s largest chain of vape stores, Highendsmoke. The company has also been linked to VPZ, though BAT has declined to comment on claims that it extinguished plans to buy the chain after a five-year distribution deal between Juul and VPZ came to light.

“When BAT started doing due diligence and opened the books, they discovered the deal to sell one of their biggest competitors [Juul], so they pulled out,” says a source. “This is what led to the PML loan. That’s what they needed to get to over 200 stores.”

VPZ, meanwhile, says this: “As the UK’s leading vaping retailer, our alignment [with PML] has supported our growth ambitions and offered a number of synergies as we aim to help even more Brits realise the transformative benefits of switching from smoking to the reduced-risk alternatives available.”

PML certainly has plenty of compelling reasons to set its sights on VPZ. Essentially, it would give the world’s biggest tobacco company control of the UK’s biggest vape retail chain. That would help PML fulfil its stated aim of delivering a “smoke-free future”.

Because a 300-strong retail estate would give PML a ready-made route to market for its heated tobacco product Iqos, as well as its struggling Vivid brand and the fast-growing Juul, which Altria has a 35% stake in.

Plus, it would diversify its vaping portfolio. Until now, giants such as BAT and PML have largely focused on ‘closed loop’ devices that are only compatible with branded refillable cartridges and sell for as little as £5.

A chain of specialist stores would help the giants gain a foothold in ‘open loop’ systems, which can be filled with e-liquids from any supplier and picked up from specialist retailers, with prices ranging from £10 to over £60. “Open systems still account for the majority of sales in the category and are growing at around 10% per year,” says Juul Labs UK sales director John Patterson.

It’s certainly a tempting prospect. However, as Juul illustrates, specialist acquisitions aren’t the only route to growth for the giants. For there is plenty of potential to reap rewards from closed loop devices. “Over 80% of category growth is coming from closed pod-based systems such as Juul,” stresses Patterson. “Grocery retailers have been quick to recognise the potential of these formats and this has resulted in this channel outperforming others. Closed pod systems take much of the complexity away for the adult smoker looking to switch and for retailers as they’re simpler to use, more convenient and require minimal product training and upkeep.”

Indeed, the seven top supermarket brands owned by tobacco companies are all closed loop systems; the remaining three are independently owned e-liquid brands that can be used in open devices. Convenience clearly counts in the grocery channel.

“Supermarkets and convenience stores require retail-friendly products that are easy to use and fuss-free,” says John Taylor, chief marketing officer at Vape Dinner Lady, an independent brand that has seen sales surge by almost 500% [Nielsen]. Taylor partly puts the growth down to the launch of the Dinner Lady Vape Disposable Pod.

“The pod comes pre-charged and pre-filled with a premium e-liquid, ‘ready to vape straight out of the box’. It is this kind of convenience product that’s powering the growth in retail and has resulted in growing interest by the big retailers in vaping solutions.”

If brands can marry this convenience aspect with innovation, all the better. “This year, innovation will be key,” says Nick Geens, head of reduced risk products at Japan Tobacco International, owner of the third bestselling vape brand in the mults, Logic. “From more adventurous flavours to new devices, retailers need to consider new products to keep up with vapers looking for the next big thing. Nicotine salt e-liquids, designed to offer a smoother and more intense flavour delivery, are set to grow.”

Yet even here, there is a difference between closed loop and open loop systems. Logic’s Banoffee and Chai Latte flavours sound somewhat staid next to the liquids designed for open systems. These include brands with names rooted in drug culture, such as Acid House, Acid E-Juice and Bad Drip. Others, such as Slushie and Frog in a Blender, have clear youth appeal, as do Rainbow Candy, Bubblegum and Gobstopper flavour liquids, which often come in cartoon-style packaging.

This could pose a potential problem as much as an opportunity. As with alcohol, the sale of vaping products to anyone under the age of 18 is banned. But vaping has much lighter regulation on marketing to minors. If the above products were alcoholic drinks, it is likely they would be pulled from the shelves because industry self-regulatory body the Portman Group explicitly bans the use of “cartoon-style imagery”.

There is currently no such system for vaping products. “There absolutely needs to be more clarity and robust regulation,” says Lee Bryan, MD of vaping regulatory compliance consultancy Arcus Compliance. “There are now more than 2,000 stores operating in this market. The ones that are struggling to stay afloat are prepared to take more risqué products to try and stand out.”

This appears to be making its mark on society. One in six children aged 11 or older have tried vaping, double the number that had in 2014 [Public Health England], and 6% of the UK’s 3.6 million vapers identified by the charity Action on Smoking & Health have never been smokers. Which means that if big tobacco is to get in on trendy vaping shops, it will have to tread very carefully.

The knock-on effects of Trump’s ‘war on vaping’ 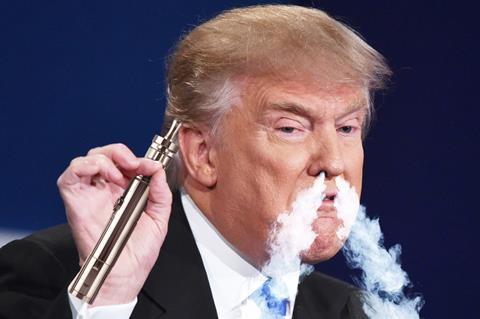 The American right likes few things more than a good war on something. See the war on drugs, the war on terror and, now, the war on vaping, for proof.

“People are dying with vaping so we’re looking at it very, very closely,” President Trump told reporters last September, announcing plans to ban flavoured e-cigarettes, after thousands of respiratory illnesses and 47 deaths were linked to vaping.

Trump has since performed more u-turns than an Uber in a new town. In November, he reversed the plan, fearing job losses and voter anger, according to reports. In December, he announced a ban on some flavoured e-liquid pods for closed loop systems. “People have died from vaping,” he said. “We think we understand why.” He didn’t. The fruity pods Trump ended up banning (menthol and tobacco pods and e-liquids for open systems were not affected) were not the cause. In January, the Centers for Disease Control & Prevention linked the outbreak of illnesses with vitamin E acetate, a diluent used in unlicensed e-cigs containing THC.

By then, sales of legitimate vaping products had been hit hard, even on these shores. “The first eight months of 2019 saw continued growth in the category across all channels as more adult smokers switched from tobacco use,” says Juul UK sales director John Patterson. “From August onwards the category was impacted by media coverage in the US.”

Although some have suggested there were ulterior motives for the ban of only certain flavours used in closed loop systems, Trump said he wanted to protect “innocent children”. And Health & Human Services secretary Alex Azar said in January the ban would affect products most favoured by kids.

“By prioritising enforcement against the products that are most widely used by children, our action… seeks to strike the right public health balance by maintaining e-cigarettes as a potential off-ramp for adults using combustible tobacco while ensuring these products don’t provide an on-ramp to nicotine addiction for our youth,” said Azar.

A 2018 survey found that vaping among US high school kids had grown 78% year on year. Here, one in six kids have tried vaping, double the number that had in 2014 [PHE].