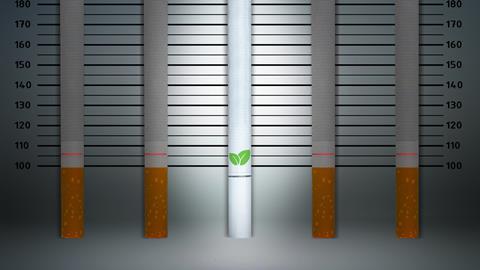 Brits are ditching cigarettes in favour of specialist vaping devices. That’s got big tobacco running scared and scrabbling to invest

For anyone under the impression that Brexit would be the end of EU influence on UK rules and regulations, here’s a timely reminder that is not the case.

Because spring will herald the final part of the second EU Tobacco Products Directive. That means sales of menthol and flavoured cigarettes and rolling tobacco will become illegal from 20 May. It is also the end of the grace period for wholesalers and retailers to be fully compliant with track & trace rules.

It’s the parting shot from the EU legislation, which since 2017 has dictated the increase of minimum cigarette pack size to 20 sticks and roll-your-own tobacco pouches to 30g, far bigger pictorial health warnings, track & trace and limits on the nicotine content and marketing of vaping products.

The forthcoming flavoured tobacco and menthol ban is arguably as big a change as any that have gone before. Currently around 25% of all cigarettes and rolling tobacco sold in the UK are menthol or flavoured. Considering the combined sales of factory-made cigarettes and rolling tobacco in the UK is worth £14.5bn, that will represent a massive financial hit. It is also set to seriously slow down the NPD pipeline, which for the past decade has been completely dominated by products with capsules in the filters, allowing smokers to change the flavour of their cigarette at any point in the process.

The first two of these capsule cigarettes launched in the UK in 2011. These were JTI’s Silk Cut Choice and BAT’s Lucky Strike Click & Roll. “This is going to change everything,” said BAT premium brand manager Hinesh Patel at the time.

He was right: initially seen as a premium format, this type of cigarette was soon rolled out into all pricing sectors and across most brands. New products were being launched long after the introduction of the retail display ban and introduction of plain packaging. Flavour-changing capsule cigarettes now account for 17% of the market and billions of sales every year.

So can the tobacco giants withstand this regulation, alongside the long-standing decline in smoking numbers and trend towards cheaper tobacco? And how are they gearing up for the changes? The simple answer is by doing anything and everything they can within the framework of the legislation.

Benson & Hedges lights up: top cigarette & roll your own brands

“If the tobacco category is anything, it’s resilient, having faced countless legislative changes over the past decade,” explains JTI UK head of communications Mark Yexley. “It is by far one of the most robust fmcg categories - and one which will only continue to evolve and adapt in light of the pending menthol and capsule cigarette ban.”

The industry is certainly throwing its resources into mitigating the impact of the legislation. Already this year there has been a raft of NPD designed to offer an ­alternative to the traditional menthol. On the accessories front, Republic Technologies has this month launched six filter products under its Swan brand - three of which are menthol products, including two crushball filters.

That follows the launch of Rizla Flavour Infusions in January. The flavour cards, which have an rsp of just 25p, can be added to packs of cigarettes or rolling tobacco to infuse it with menthol or mint flavours. “Menthol and crushball sales are collectively worth 26% of the total UK tobacco market, which means they make up nearly one in four cigarette sales. Given its sizeable share of the tobacco market and store sales, this is an important change that retailers and their customers need to be prepared for,” explains Imperial Tobacco UK corporate affairs director Duncan Cunningham.

“The ban on menthol tobacco products will leave many existing adult smokers without their product of choice. Some adult smokers may simply switch to other traditional tobacco alternatives, whilst many menthol consumers may also use this as an opportunity to explore new ways to stick with their flavour preference and move into vaping. However, this shift in consumer purchasing behaviour may present significant sales opportunities for retailers who are prepared for the changes and engage with shoppers ahead of the ban.”

There are, of course, precedents to indicate how consumers will change their behaviour. The UK is not the first country to introduce a menthol ban: most notably Canada did so in 2017. Past evidence suggests most flavoured and menthol smokers will revert to the regular tobacco variant of their chosen brand, points out JTI UK general manager Dean Gilfillan.

“We believe that a lot of smokers will stick with their brand post-menthol ban,” adds Gilfillan. “However, if the consumer decides that menthol is more important to them than their current smoking experience, we’ll give them other alternatives because our global strategy is all about consumer choice. We would never be arrogant enough to tell consumers you only have one alternative.”

To this end, JTI launched its Sterling Dual Capsule leaf-wrapped cigarillos earlier in February. It dodges the legislation on flavours, which currently does not cover cigars and cigarillos.

Dean Gilfillan: how JTI is tackling Brexit, track & trace and the menthol ban

Also spotting an opportunity in this area is Scandinavian Tobacco Group, which will launch a cigarillo with a capsule in the filter later this month. STG UK country director Alastair Williams is feeling confident.

“We are really excited to introduce Signature Dual to the UK tobacco market. Undoubtedly there are a huge number of menthol cigarette smokers in the UK who will be looking for an alternative come 20 May and we are confident that this product will prove to be a fantastic option for them,” he says.

“There appears to be a misconception amongst some retailers that all menthol tobacco products are banned, but this is absolutely not the case. Signature Dual is a cigarillo, or short cigar product, so is therefore exempt from the legislation. We’d recommend retailers start talking to their menthol cigarette smokers about the ban now as some won’t be aware, and if they can begin to switch them over to Dual then they won’t lose those all-important sales.”

Another company keen to exploit alternative formats is Philip Morris, which will still be able to offer menthol tobacco in its heat not burn Iqos devices.

“The upcoming ban on menthol cigarettes and menthol capsule cigarettes will directly impact 1.3 million smokers in the UK. Menthol flavoured vapes and menthol heated tobacco products, like Iqos, are unaffected by the ban and will still be available for purchase,” explains MD Peter Nixon. “We want retailers to be aware that their customers who are menthol cigarette smokers, and don’t quit completely, can switch to heated tobacco as a better alternative than continuing to smoke combustible cigarettes.”

So it seems alternatives to the menthol cigarette - whether cigarillos, flavour cards or heated devices - are coming thick and fast. With this level of innovation, manufacturers hope to avoid losing sales to their rivals, or worse the illicit trade, the only place where traditional menthol cigarettes will still be readily available

At least it’s the last bit of legislation set to hit the industry - from the EU, anyway.