It’s enough to curdle the milk. If you’re looking for good news from a dairy sector that has stumbled from one crisis to the next over the past two years, best not look to butters & spreads.

Value is melting away as brands have had to slash prices in the face of a perfect storm of intense own-label price competition, falling sales in host products such as bread, plummeting consumption (BSM volume sales are down 1.3% year on year) and widespread range rationalisation and cuts in facings.

So what can brands do to turn the tide?

One of the biggest frustrations for butter brands over the past year has been that the changing public debate about healthy eating hasn’t translated into better fortunes for the category. As the health debate has shifted further away from fat and towards sugar, many consumers continue to turn back to butter as a ‘better for you’ option seen as less processed and more wholesome than reduced-fat spreads.

But while this has resulted in healthy volume uplifts for both spreadable and block butter, only spreadable has been able to turn this into an increase in value, with sales up 3.4% to £426m. In contrast, block butter value sales are down 5.8% (or £18.5m) to £301.9m, and branded block butter has fared even worse - value is down 9.4% on last year, and volume is down 1.6%.

Fierce price competition from own label and rock bottom commodity prices for butter are largely to blame, with the average retail price for own-label block butter down 12.7% year on year. Brands have had little choice but to follow suit. 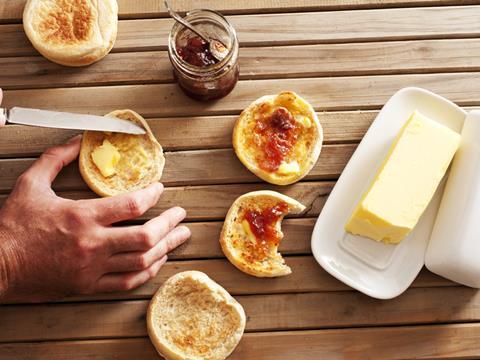 Block butter has become the hardest sector for suppliers to compete in, says IRI senior insight manager Wendy Kilner-Smith, “particularly as own label continues to erode value through price declines”. Brands urgently need to ensure their products offer consumers a point of difference and a reason to spend more money, she adds.

Block butter is at a further disadvantage as consumers prefer the convenience of spreadable, argues Hamish Renton of food consultants HRA. And then there’s the tricky business of managing consumer expectations.

“More and more people are coming across to butter from other spreads as part of a trend towards more natural products,” says Dairy Crest marketing manager for spreads Neil Stewart. However, once they try butter again, many consumers are reminded why they switched to spreads in the first place. “There is generally a trade-off between how convenient and spreadable something is and how natural it is, and that’s why many consumers are moving to spreadable.”

The market dynamics are undoubtedly challenging and Dairy Crest’s flagship Country Life butter brand has suffered a 5.5% drop in total value sales over the past year, but Stewart is confident it can recover. “The advantage it has over other butter brands is its Britishness, and we think it is well positioned to capitalise on the category’s growth.”

While Dairy Crest goes big on provenance, Arla says responding to changes in consumption patterns is key to shoring up the fortunes of its butter brands, Lurpak and Anchor, which have seen value sales fall by 1.1% and 0.9% respectively, though volume sales for both brands grew, by 5.7% each.

Consumers are “actively trading up” to more natural products, says Arla Foods UK’s director of BSM, Ruby Ali-Brett, but they are also switching off from BSM products as tastes for host products such as bread are changing. “Breads of the world such as wraps, bagels, and focaccia are in growth, but in these sub-categories butter doesn’t play a natural role,” she says. “So we are trying to react to those evolving habits with our latest innovations such as Lurpak Infusions.”

The flavoured butter range launched in April and has had a positive response so far from retailers, she adds, and was developed in an effort “to get our brands and products into these new usage occasions”.

Gaining retailer support for NPD like Infusions is no easy feat in the current trading climate, with the mults taking a very close look at the brands they stock and stripping out duplication or slow-selling products. That cutting-edge innovation doesn’t have always stay the course was experienced first hand by Arla with its Cook’s Range of cookery-focused BSM products, which was pulled last summer after 17 months due to poor sales.

Despite this, Ali-Brett says Arla is “proud” of what the range achieved and hints it could even make a return one day.

“We’ve had a lot of feedback from consumers that they have missed it since it was delisted,” she says. “Watch this space; we have lots of exciting plans coming up for Lurpak.”

While the overall market dynamics are tough for butter suppliers right now, there are some brands that are managing to grow value. Kerrygold (up 3.1%), Yeo Valley (up 3.6%) and Graham’s the Family Dairy (up 27.3%) are all bucking the deflationary trend in the category.

What unites the three brands is their emphasis on naturalness. Graham’s, for example, has leveraged this to become the second-largest BSM brand in Scotland, with ambitions to widen sales across the UK.

“Our products have been doing well both in block and spreadable, with block sales over the past 12 weeks up about 5% and bucking the general trend, while spreadable butter value sales are up about 32% over the same period,” says MD Robert Graham. “We’ve definitely benefited from being the number two brand in Scotland and it has given us the opportunity to pick up more shelf space.” 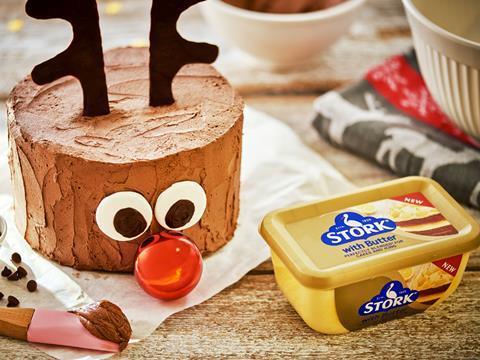 While the trend towards naturalness helps butter brands, it is making life hard for spreads. Even core lines of established spreads brands are having to fight harder than ever to retain space.

Dairy Crest is seeing this with Utterly Butterly right now, which has lost 29.4% of its value over the past year, while volumes have slumped 26.9%. “Part of this decline is distribution related,” says Stewart. “Most of the major mults now have Utterly Butterly out of their range, with Tesco, Asda and Sainsbury’s having delisted it.”

The overall dairy spreads segment has seen values fall 16.2% over the past year and volumes by 13.7%, and Utterly Butterly is far from the only brand to be affected. Unilever-made rival I Can’t Believe It’s Not Butter has seen value sales fall 24.2%, or almost £15m, while volume sales are down by 25.4%.

Stewart doesn’t pull his punches when assessing the future of the category.

While there are channels such as convenience where Utterly Butterly can continue to thrive, the decline of dairy spreads’ main brands “point to what the category will potentially look like in a few years’ time, with no place for those spreads that come across as artificial” he suggests.

To stem the decline in spreads, innovation and refined positioning is a top priority for many suppliers.

Dairy Crest relaunched and reformulated Clover last August to contain no artificial ingredients in a bid to better appeal to consumers interested in ‘naturalness’.

Full-year sales for the brand continue to look shaky, but Stewart insists it is now on the road to recovery. “Looking at full-year results doesn’t tell the whole story, it’s almost a tale of two halves for Clover,” he says. “The relaunch and reformulation has really paid off in terms of sales.

“Clearly spreads as a category is in long-term decline and we expect that to continue, but Clover is doing better than the overall category and has increased market share from 20% to 22% since last August.”

But despite Stewart’s confidence in the wider prospects for the brand, not all of its innovation has worked.

Clover launched a trio of cooking sprays last April in chilli, garlic and butter flavours, and it has delivered almost £350,000 in value sales since launch, but it was delisted in May, Stewart says, as Dairy Crest seeks to concentrate on the brand’s core products.

Unilever, meanwhile, has been spending heavily in the wake of a £21m combined loss in value sales for Flora and Bertolli, which put the brands as two of the worst performing in the BSM category, alongside stablemate I Can’t Believe It’s Not Butter. 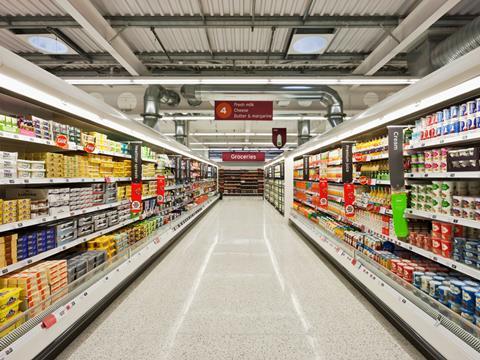 It completely revamped the Flora brand in January, with a £12.5m repositioning of the portfolio as a dairy-free spread range using the tagline ‘Powered by Plants’, and the launch of all-new Flora Freedom, which boasts 60% less saturated fat than butter.

The relaunch was designed to showcase health credentials such as Flora’s low fat and high omega-3 and 6 content, and it has “so far resonated well with our customers and they are continuing to engage with the importance of a plant-based diet” says Unilever brand building director Caroline Jarry.

However, Gold from Flora, which launched in 2014 and is blended with butter, arguably looks out of step with the rest of the plant-based portfolio now. But Unilever says it remains committed to the variant, adding the Flora range now “offers consumers products to suit every need”.

Other suppliers are also going big on plant-based credentials. Tesco recently added own-label dairy-free spreads made with on-trend avocado and coconut oil to its range, while Dairy Crest is ramping up investment in dairy-free spread Vitalite.

“It’s an area we have identified as having the potential for having long-term and exciting growth potential,” says Dairy Crest’s Stewart. “In Vitalite we already had a brand in our portfolio that was dairy-free and plant-based, but it wasn’t really noticeable on pack, so we’ve revamped the packaging and reformulated it, and the next stage for us is to communicate these changes in the ad that dairy-free, plant-based spreads can be upbeat and positive and don’t have to compromise on taste.”

Dairy companies touting the advantages of dairy-free spreads? It’s a counterintuitive proposition, but if it allows BSM brands to talk to consumers in a way that resonates, it may just be what the category needs to return to value growth. 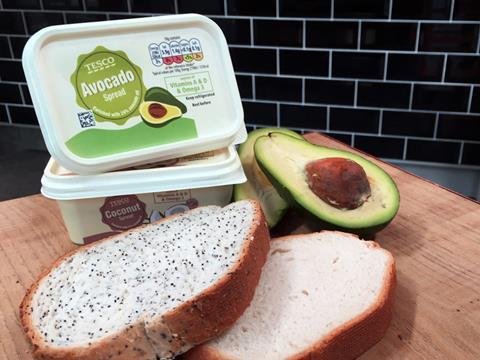 Tesco claimed a UK-first last month with the launch of a dairy-free avocado spread under its own-label range designed to capitalise on the fruit’s booming popularity. The spread contains 24% avocado oil and is a source of vitamins A and D and omega-3, and has been pitched as an alternative to butter and margarine. It went on sale in 400 Tesco stores nationwide, alongside a sister spread made with coconut oil (rsp: £1.20/250g). 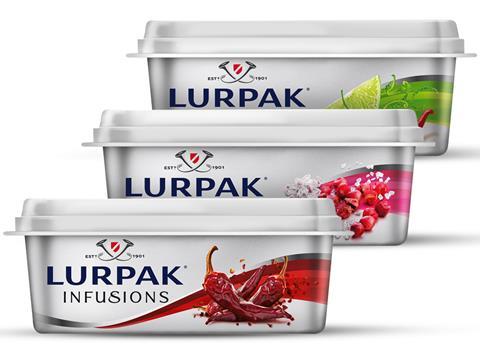 Lurpak took another stab at innovative butter (after the delisting of its Cook’s Range last year) with the launch of a range of spreads made from a blend of butter and rapeseed oil with added herbs and spices. The range began rolling out last month in Chilli & Lime, Smoked Chipotle, and Sea Salt & Pink Peppercorn flavours (rsp: £1.25/115g). 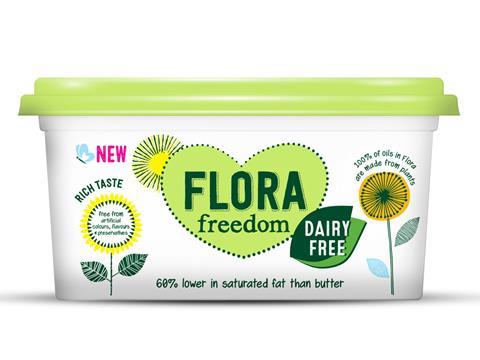 Unilever unveiled its first-ever dairy-free spread under the Flora brand as part of a £12.5m revamp of the Flora portfolio to tap demand for free-from products and a growing interest in plant-based eating (rsp: £1.70/500g). The spread is made from vegetable fat containing rapeseed and palm oil and uses only natural colour and flavourings. 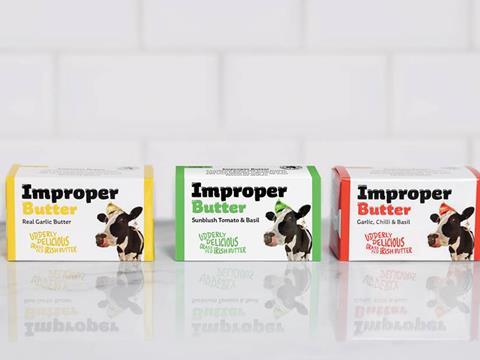 The Irish brand, which combines grass-fed Irish butter and fresh herbs, launched in the UK in John Lewis food halls last autumn in Real Garlic and Garlic, Chilli and Basil flavours (rsp: £1.89/100g). Designed to melt over meat, fish, potatoes, vegetables and bread, the product has picked up multiple awards in Ireland.