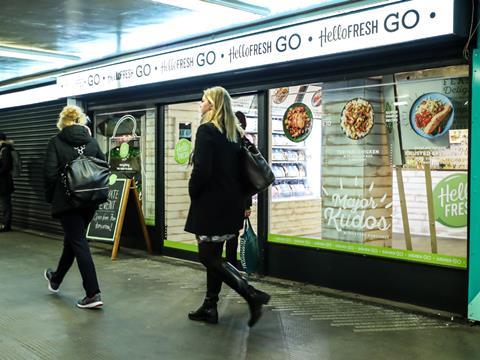 The East London pop-up shop will sell single recipe boxes – enough for one meal for two – at £10 each from today until the end of March.

Hello Fresh will donate 10% of all profits to London-based food waste charity The Felix Project as part of its ongoing partnership with the organisation.

The company has selected the most popular recipes from its archive of 5,000 to go on sale. These include teriyaki chicken with coconut rice and bok choy, sesame-crusted salmon with couscous and tomato salsa and, as a vegetarian option, Mexican tomato jumble with spiced citrus halloumi. All of the recipes can be cooked in around 30 minutes.

Hello Fresh will also be serving mocktails and running promotional activity to encourage sales. The first 100 people to post a picture of themselves at the pop-up and tag @hellofreshuk on Twitter will win a free meal kit, while anyone making a purchase will have a chance to win a “foodie trip” to Florence for two.

“As we celebrate our fifth anniversary, the launch of our first ever retail space marks an exciting time for the business,” said Hello Fresh MD Ian Marsh. “We are responding to the fact that our customers have said they would like the flexibility of being able to pick up our recipe kits on their way home. Now hungry Londoners can ‘pick and go’ whilst supporting The Felix Project, a charity very close to our hearts, at the same time.”

In November, Hello Fresh staged a two-day sale of its meal boxes in central London venues such as Waterloo station to raise money for The Felix Project. Londoners purchased the full recipe boxes - which contain three meals for two and normally retail at £36 - for whatever price they chose, with all proceeds going to charity.