UK and European beef prices continue to tumble, with deadweight prices in the UK and France now down by nearly 10% on last year. Prices in the UK are falling largely because of lower feed costs and because 2014 production is expected to be up 2% year on year.

In France, higher production is primarily to blame, with beef production forecast to be up 2.8% year on year to 1.48 million tonnes as a result of an expanded dairy herd.

Prices for Brazilian beef, by contrast, are rising thanks to strong export demand and tight domestic supplies.

The Russian import ban on EU pork is hitting Danish pork prices, which are down nearly 7% year on year. 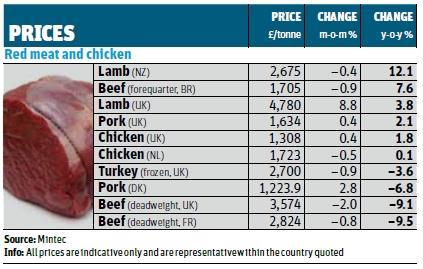