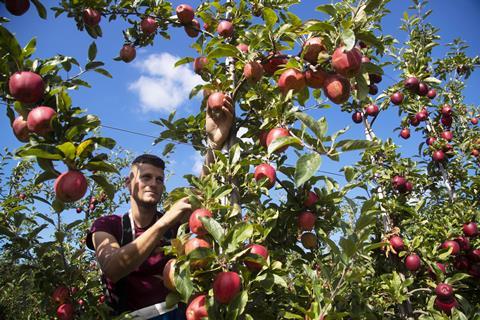 According to a survey of apple growers by British Apples & Pears this month, some 1,147 tonnes of apples – about 16 million units – have been left unpicked this season. However, the trade body’s survey only polled a third of the industry, and it warns the total amount of unpicked top fruit “could be much more”.

Wholesale prices have not yet reflected this squeeze on apple supplies and were actually 11% down in the third week of October both month on month and year on year at 89p/kg [Mintec]. But prices are expected to “strengthen in the near future if field losses continue”, suggests Mintec market analyst Rutika Ghodekar.

“Growers were expecting a big crop this season. However, uncertainty around Brexit has forced EU workers, who make up 99% of seasonal pickers, to leave the UK, leading to the massive loss of fruit,” she says.

Seasonal labour crisis is a serious threat to British farming

Analysis of supermarket prices by The Grocer has shown minimal inflationary impact so far. Waitrose own-label loose Braeburn and Royal Gala apples are among a small amount of British apple SKUS to see price increases in recent weeks. Year on year prices were up 10% per kg at the start of October to £2.22 and £2.19 respectively [Edge by Ascential].

The labour shortages have led to increased calls from growers for the government’s seasonal agricultural workers pilot to be extended. “We cannot allow British apples and pears to rot in orchards,” says BAP executive chair Ali Capper.

Without “clear signals” from government it will increase the pilot scheme from 2,500 to 70,000 workers, a number of large-scale growers “will scale back UK production and move investment overseas next year”, she warns.