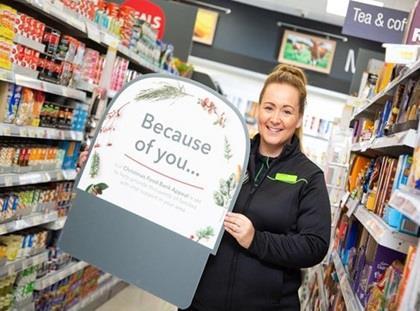 Customers of Central England Co-operative stores have donated enough food over the Christmas period to feed over 30,000 individuals and families in need.

Shop-floor employees at around 180 stores across 16 counties used connections with local food bank providers to encourage customers to drop off items as part of the cause.

Donated products went on to become part of food parcels distributed alongside support for individuals and families in need between 26 November and 24 December 2018. They included approximately 11 items such as tea, sugar, rice, pasta, cereal and toiletries, and provided at least three days’ worth of meals.

The parcels were handed out alongside festive treats customers were encouraged to contribute, such as chocolate and small gifts. This was added in a bid to ‘spread a little festive cheer.’

“We have all been amazed by the fantastic response to our Christmas Food Bank Appeal from customers, members and colleagues,” said Central England Co-operative chief executive Martyn Cheatle.

“We are proud to be able to support the great work of local food banks across our trading area during the festive season and throughout the year, and want to say a big thank you to everyone who donated, not just to the Christmas appeal but our year-round collections. The generosity and support throughout 2018 has helped make a major difference to people from all walks of life.”

Cheatle also requested its customers continue to support its food banks through 2019 so the society can continue “providing vital donations to good causes that can really make a positive impact on those in need.”