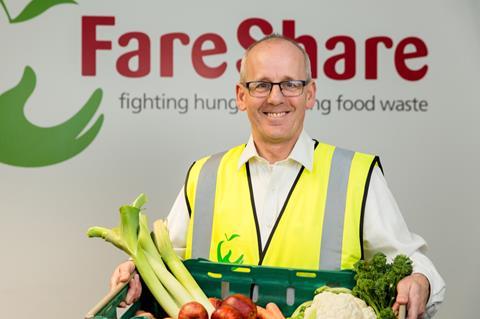 FareShare has been ‘overwhelmed by the number of new businesses getting in touch’, said CEO Lindsay Boswell

Food redistribution charity FareShare has thanked The Grocer, alongside Manchester United star Marcus Rashford, in helping enable it to to feed thousands more vulnerable people during the coronavirus outbreak.

Today it revealed almost 150 new food businesses had signed up to donate food or divert surpluses to organisations supporting vulnerable people since the lockdown began 100 days ago yesterday.

FareShare was already working with about 600 food businesses to divert food that would have otherwise been wasted to frontline charities such as homeless hostels, food banks and breakfast clubs, before the pandemic struck.

But it said the influx of new partners had enabled it to triple the amount of food it distributed each week, which last week saw it provide charities and community groups across the UK with enough food to create over 3.2 million meals.

The charity said the work of The Grocer in shining a light on the plight of vulnerable groups and encouraging industry action had been “crucial”.

FareShare has also received a huge boost from the involvement of Manchester United star Marcus Rashford, who has launched a campaign to raise £100,000 worth of donations for the charity.

“We’ve been overwhelmed by the number of new businesses getting in touch to divert their surplus food, or donating much-needed packets and tins,” said FareShare CEO Lindsay Boswell. “The unwavering support of our food partners has been the critical factor in helping us triple the amount of food we’re getting out to those in desperate need during this crisis.

”We are also enormously grateful to The Grocer, who, by shining a spotlight on the scale of the problem and consistently championing our work, have helped galvanise the food industry, resulting in this incredible response.

“However, as we head into a period of recession, we know many more people who’d previously been ‘just about getting by’ will be at increased risk of food insecurity and hunger. With the continued support of our food partners we’re gearing up to ensure we can continue getting food on to the plates of some of the most vulnerable people in our communities in the very difficult months and years to come.”