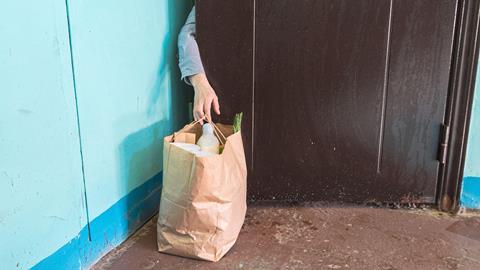 Feeding the vulnerable: why has a government plan taken so long?

As the nation hurtled towards a no-deal Brexit last year - then for many the food industry’s worst nightmare - discussions were held over a topic of enormous national importance: just who was responsible for feeding the hungry if the feared food shortages became a reality?

As events transpired, the dreaded ‘cliff edge’ never happened. Instead the issue, which had been the subject of repeated talks between ministers, trade groups and businesses, was parked, along with the National Food Strategy.

Which may explain why, almost 40 days after Boris Johnson sent the nation into lockdown, confusion still reigns over how food will get to the millions of people caught up in an emergency that threatens to make Brexit look simple.

Around 1.5 million people are on a government ‘shield list’. They are advised to stay home for 12 weeks because the NHS deems them at “very high risk” from coronavirus thanks to an existing serious health condition. Then there is the much larger group at “high risk”, including over-70s, the pregnant, the seriously overweight and those with a broad range of conditions from diabetes to learning disabilities - a group which numbers 19 million, according to NHS Digital.

On Sunday, environment secretary George Eustice admitted that despite a massive ramping-up of online and click & collect services, supermarkets would not be able to cope with demand from all those in self-isolation.

While government food parcels have at length been successfully delivered to the ‘shield list’, the strategy to feed the 19 million at high risk has resulted in increasing tension between ministers and supermarkets.

How food charities are fighting hunger amid the coronavirus outbreak

When Eustice took to the Downing Street stage on Sunday, he praised the supermarkets, which he said had created more than 500,000 extra delivery slots since the crisis began. But he said it was “still not enough to meet all of the demand out there”.

Supermarkets have indeed responded to the crisis with a huge increase in capacity. This week Tesco became the first UK retailer to fulfil one million online grocery orders in a week, having doubled its number of slots since the crisis began.

But retailers tell The Grocer they are furious at the government for having relied on an online network which at the start of the crisis made up around 8% of their capacity.

Indeed, even before the lockdown, the chances of online groceries feeding the vulnerable was described as a “pipe dream” by ex-Tesco logistics boss turned senior Bernstein analyst Bruno Monteyne. But it was a pipe dream ministers steadfastly refused to abandon while retailer websites crashed under the weight of demand

“Supermarkets are really pissed off,” says one leading source. “They want to help but they have been telling ministers for weeks this is not the way to tackle the problem. The message has not got through. We just can’t understand why they have been so slow to act.”

“We have always said it will be through community operations that people will get the help they need, not through online,” he says.

Almost a week after Eustice’s admission that .com was not going to manage the job, there still remains deep confusion about exactly what the government plans to do.

The Grocer understands, under plans discussed by supermarket chiefs and Defra, a new script has been prepared which will redirect customers for all supermarkets to local volunteers.

Customers entering their postcodes will be linked up with 300 local authority “food hubs”, who would arrange for an army of volunteers to collect and deliver food on behalf of those needing it.

But Defra told The Grocer this week there was still no definite launch date for the strategy, as it works with cash-strapped local authorities and charities to ensure people do not slip through the gaps.

“Wherever possible, people should continue to rely on friends, family and wider community support,” says a Defra spokeswoman. “Where this is not possible, local councils may be able to offer emergency support.”

Eustice spoke of some of the work going on behind the scenes to sort out the mess, including Defra linking up with charities such as Age UK and the Good Samaritan app to locate volunteers.

“Local authorities have faced budget cuts. They’re not up to the job”

However, The Grocer has learnt the going has been far from smooth, with Defra nervous about pressing the button on the new strategy too early.

A source familiar with the situation says the process has been held up by concerns over the screening of volunteers.

“Defra is trialling connecting those who need shopping with local volunteers with several local authorities but there is still no date on when it will be rolled out nationwide,” they say.

“There are a variety of local volunteers - those identified through the NHS Goodsam campaign, those from charities supporting the elderly and vulnerable and those linked already to local authorities.

“The government has been looking at ensuring they are the right people - volunteers will be supporting very vulnerable consumers.”

Despite an entire Defra team having been tasked with cold calling local hubs to test their resilience, insiders report nervousness at the top about the plan. Volunteers to the Good Samaritan app are said to have become muddled with those who put their names forward to help NHS frontline workers, rather than feed their local communities.

“It’s fallen down because the government has wanted to rely on local authorities to help reach all these millions of people who need help,” says a leading charity source. “The trouble is, these are the same local authorities that have faced year after year of budget cuts, and they are not up to the job.

“Supermarkets want to help but at the same time, in amongst all these millions of people wanting deliveries and wreaking havoc with their systems, they have their loyal customer base that they want to retain when all this is over.”

This being over is some way off yet, but when it is, it will be down to MPs and the National Food Strategy, once it eventually emerges, to make sure this doesn’t happen again. 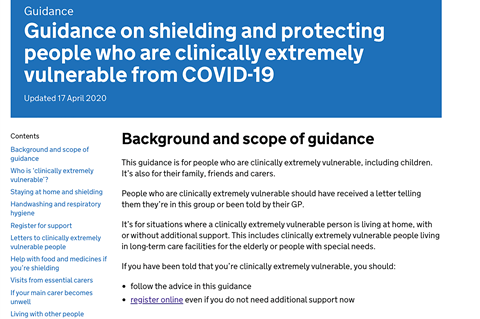 On 31 March Hazel Dakers, 70, from Brentford, got an NHS email saying she was at very high risk. She completed the online government form on 16 April.

Tesco: Email received 20 April promising priority access to slots, though “still subject to availability”. After three checks a day a slot was secured on 23 April for the following week.

Asda: Email received 22 April, offering priority pass, enabling her to view and select delivery slots in advance of the broader public, with option for recurring weekly slot, plus free delivery.

Waitrose: Email received 24 April giving “new priority status” and slots “ahead of other customers by the end of next week”. Regular checks but still no slots available.

Iceland: Email received 28 April saying slots would be made available between 4pm and 5pm on 30 April via link before being opened to others.

Ocado: Still no communication, despite Dakers paying for Smart Pass before lockdown.