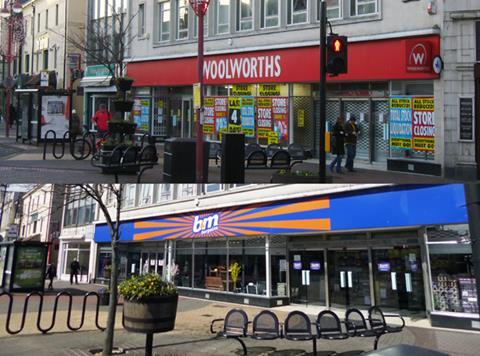 A massive expansion of discount stores on the high street has led to it outperforming retail parks and shopping centres in the recovery, according to a new report by Deloitte.

It showed just 20% of high street shops affected by 27 high-profile administrations since 2009 are still vacant, much lower than the comparative level in out-of-town locations.

Deloitte claimed charity shops, pawnbrokers and bookmakers had shown limited interest in acquiring the shops in the study, with just 3% of shops post-administration occupied by charity shops and less than 0.01% turned into pawnbrokers or bookmakers.

“It is likely that the rate of expansion by bookmakers may not be as aggressive as widely believed,” said Ian Geddes, head of retail at Deloitte.

“The growth in online and mobile gambling would appear to make any substantial long-term growth in overall betting-shop numbers unlikely.”

“The results of this research are surprising and seem to challenge a number of myths around the state of the high street,” said Hugo Clark, director at Deloitte and author of the report. “They would suggest that far from being dead, the high street appears to be showing great resilience and a capacity for reinvention. It seems that a structural shift is taking place with the high street emerging as an unexpected winner.”

Jon Copestake, retail analyst at The Economist Intelligence Unit, warned that one in five stores were still lying empty.

“There is also an important regional disparity to consider here,” he said. “London retail has largely outperformed the wider industry thanks to continued growth in spending there and retail tourism.

“With high street vacancies approaching one in three stores in other areas of the country the notion of resilience may seem a little optimistic. It is certainly true that the high street is outperforming other formats such as retail parks, which have also struggled against the challenge of online growth and weakening consumer confidence but without the supplementary footfall a high street brings.”