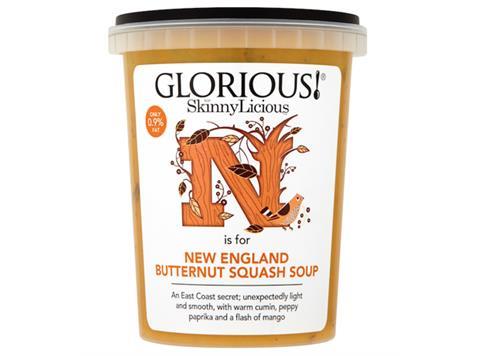 TSC Foods, the owner of Glorious! Soup, has been bought by Lancashire food manufacturer The Billington Group for an undisclosed sum.

The Billington Group chief executive Gary Blake said TSC was a “fantastic acquisition” for the group, and fitted in well with its strategic vision. Billington owns the English Provender Company and Very Lazy in addition to its foodservice business Bar Foods, and agricultural and biofuel businesses.

“We believe that TSC Foods is a perfect fit for our strategic vision to become the market leader in the foodservice sector,” Blake said.

TSC Foods also manufactures sauces, marinades, deli products and dessert sauces for foodservice and retail, but Billington said the Glorious! brand had been a “big pull” having displayed impressive growth and potential over the last few years. “We plan to support this and develop areas to focus on,” a spokesman said.

Private equity firm Key Capital Partner backed a management buyout of TSC Foods in 2009, when the business was valued at £17m. Since then turnover has increased by nearly 50%, reaching just under £50m in December 2013, netting KCP a three-and-a-half times return on its investment, it said.

However the brand, which is listed in Sainsbury’s, The Co-op, Morrisons, Asda and Ocado, saw sales fall 10.2% this year [Nielsen 12 October 2013] with volumes also down. In response to the increasing push by own label, the brand launched its own budget soup range, Love Of by Glorious!, and has plans to move into sauces and marinades.

TSC will continue to operate from its Scunthorpe site, being led by existing managing director David Bondi and the current TSC board.