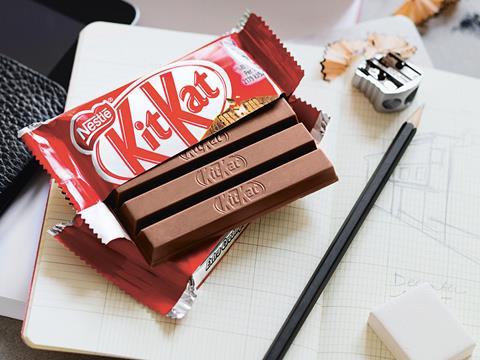 You can almost hear the exasperation seeping out between the lines of the European Court of Justice ruling on the trademark battle yesterday, which was, in the end, a big waste of time.

Forget Nestlé, if anyone deserves a break over the ongoing Kit Kat trademark saga it’s the European legal system. You can almost hear the exasperation seeping out between the lines of the European Court of Justice ruling on the trademark battle yesterday, which dismissed appeals by Nestlé, Mondelez and the European Union Intellectual Property Office (EUIPO) and ordered everyone to pay their own costs for what was, in the end, a big waste of time.

Contrary to some reports, the ECJ ruling wasn’t the final word in the decade-long battle between Nestlé and Mondelez over the EU trademark. It just upheld the EU General Court’s 2016 ruling that in order to trademark a shape, a brand must prove that shape would be recognised as its product by consumers across the EU, not just those in certain member states.

As John Coldham, partner at international law firm Gowling WLG, explained so succinctly: “The court has made the test really clear – if you have an application for a trademark that is not inherently distinctive in some or all of the EU, then you need to prove that you have acquired distinctiveness in every part of the EU where this is the case. For shape trademarks, this means you have to submit evidence of acquired distinctiveness that covers all of the EU.”

Essentially, therefore, the ECJ ruling simply returns the case to where it was in December 2016. At the time, the General Court ruled EUIPO had “erred in law” when it rejected Cadbury’s appeal on the basis that Nestlé’s mark had acquired “distinctive character” through its use in the EU. Nestlé had only demonstrated that the trademark had “acquired distinctive character through use in 10 countries”, it argued, and EUIPO could not “validly conclude” the mark had distinction throughout the EU without taking into account the other five member states.

So it ordered the EUIPO to “re-examine” whether the four-fingered shape could be maintained as an EU trademark, based on whether there was proof it had “acquired distinctive character” across all 15 relevant member states in 2002, when Nestlé made its initial registration.

Which is what will happen now. And, according to Nestlé, that’s fine, because it has proof that the evidence it provided for Danish, German, Spanish, French, Italian, Dutch, Austrian, Finnish, Swedish and United Kingdom markets applies equally to the Belgian, Irish, Greek, Luxembourg and Portuguese markets anyway.

Which does beg the question of why Nestlé chose to pursue an appeal through the ECJ in the first place. It has clearly got a lot to gain from keeping the EU trademark – but if the chocolate giant was so confident it had the evidence to prove Kit Kats are recognised across all 15 relevant EU member states, why didn’t it just accept the General Court ruling and face another EUIPO hearing?

Equally bizarre was the costly decision by Mondelez to appeal against the General Court ruling. It didn’t challenge the judgement itself (which was essentially in its favour), just the part that said Kit Kats were recognisable across 10 member states. Needless to say, the ECJ wasn’t impressed, and rejected the appeal as inadmissible.

It certainly suggests the bitter rivalry that has gripped the two chocolate giants since Nestlé blocked Cadbury’s attempt to trademark the specific colour of purple it uses for Dairy Milk – Pantone 2685C – is still very much alive. Neither wants to give the other an inch, and both are willing to spend millions on keeping face.

While this protracted battle does appear to be driven by less than practical concerns on Mondelez’s part (presuming it’s not poised to launch a four-fingered Kit Kat lookalike in the near future), it’s worth much, much more for Nestlé.

As Mark Jones, food and drink lead at Yorkshire law firm Gordons, points out, when Nestlé first chose to register the EU trademark it clearly wanted to “flex its muscles as the world’s biggest food and drink company” and deter competition from rivals. If it can keep the EU trademark, it will enjoy indefinite protection from copycat products. And even if it can’t, it might well have earned more from keeping others out of the market during this lengthy battle than it has spent on legal fees.

It’s certainly got some good publicity in the process – I for one have been craving a Kit Kat all day.