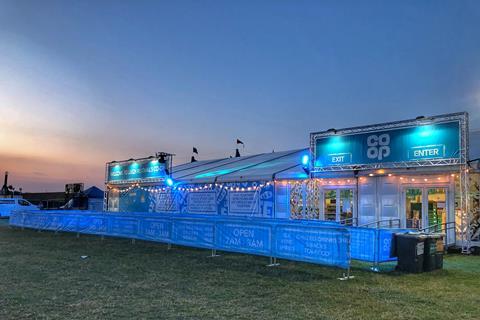 Co-op has entered into a new partnership with Cumbrian music festival Kendal Calling.

Under the new multiyear agreement, the convenience retailer will bring its festival pop-up store to the event held at Lowther Deer Park in the Lake District next year.

Its first pop-up was spotted at Scotland’s Belladrum Tartan Heart Festival in 2005. It then announced its partnership with four Live Nation festivals in 2018 in which it attended Download, Latitude, Reading and Leeds.

In 2019, it then added two more Live Nation festivals to the roster, including Creamfields and the Isle of Wight Festival.

“Co-op’s popular festival partnership programme isn’t just about building and running a store in a field for the weekend, it’s about serving a specific community’s needs while also highlighting how Co-op does business differently,” said Co-op director of marketing live and local Amanda Jennings.

Festival-goers will also be able to stock up on Co-op’s ethical ranges, including Fairtrade lines, 100% fresh British meat ranges, vegan products and its own-brand water that supports clean water projects in Africa.

“We’ve made the conscious decision to not pull away from our partnerships, but increase our investment during what is a very difficult time for the industry and develop our iconic festival family further,” Jennings added.

Will Orchard from the Kendal Calling team said: “We’re thrilled to be welcoming Co-op to Kendal Calling to provide fresh food, essentials and more for our wonderful KC family throughout the festival weekend.

“Co-op’s support as we plan for next year’s festival is invaluable and we’re looking forward to welcoming them to the fields for our 15th year.”