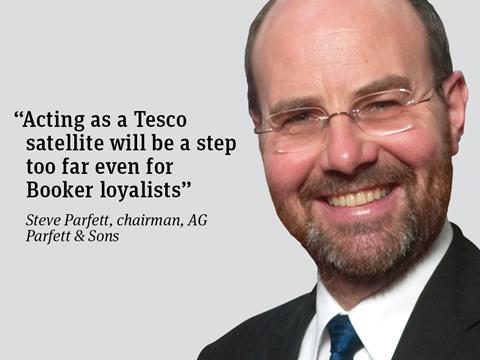 Justifying the Booker-Tesco merger to the City is extremely important in this era of megadeals and short termism. I was not surprised to see Dave Lewis highlighting the benefit of distribution of Tesco orders through independent stores in this context, whilst feeling it showed a lack of understanding of the sector. However, I was amazed that Charles Wilson was apparently also talking about such issues during his roadshows with Booker customers - Charles undoubtedly understands independents extremely well and his reference to it suggests it is an important element of the rationale to persuade the City.

I have known and worked with independent retailers since I was at school. They are passionate, individual, loveable, infuriating and unique individuals and cannot be pigeon-holed. During this time they have seen the relentless and unstoppable growth of supermarkets, then superstores and hypermarkets, more recently followed by a renewal of interest in convenience retailing by major multiples. They have fought for their interests during Competition Commission inquiries, Sunday Trading debates and massive changes in consumer behaviour. Perhaps the only characteristic that independents all share is a resentment of the arrogant abuse of power by multiple retailers, and a sense of playing on a far from level playing field. Despite this by no means all independents are opposed to the merger at this stage.

However, the idea that any of them would be prepared to act as an unpaid labourer for Tesco and receive, store and hand over multiple Tesco carrier bags of the same products that they have on their shelves to their actual or potential customers is both ridiculous and, I would argue, unforgivably insulting. That they should be expected to live on crumbs from the table of Tesco, hoping that the customer who has just spent £60 on meal for tonight and restocking household goods and groceries will suddenly realise they need a pint of milk, is nonsensical.

Despite reservations about some aspects of service provision, I have supported the concept of lottery, bill payment systems, parcel collection and phone top-ups as footfall drivers in indie stores. However, acting as a Tesco satellite to enable them to increase their dominance and power will, in my opinion, be a step too far even for those Booker loyalists who have come out in support at this stage.

If this aspect of the deal is really as important as the commitment of Lewis and Wilson suggests, then I suggest City investors should be extremely concerned. In the meantime I remain convinced not only a referral to, but a refusal from, the CMA are the necessary next steps.