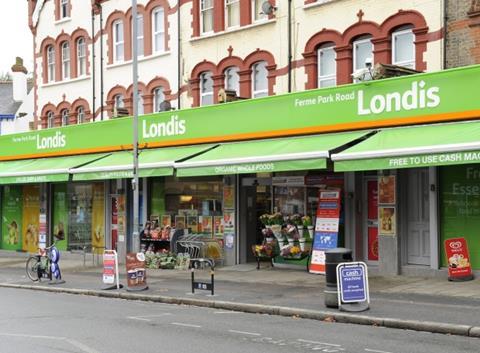 Lots of people were combining their daily exercise with a visit to the local shop, according to Kantar

Grocery sales at independent retailers and symbol groups, including Spar, Nisa, Premier, Londis and Costcutter, have outpaced the record growth of traditional supermarkets and discounters, as consumers shopped around after coronavirus-related stockpiling left shelves bare.

The latest grocery market share figures from Kantar revealed year-on-year sales growth at independents reached 45% in the four weeks to 22 March. The figure was far ahead of the 20.6% growth for the industry as a whole, with March the biggest month of grocery sales ever recorded.

Almost 90% of British households visited a supermarket between Monday 16 and Thursday 19 March, making 42 million additional trips during that time, according to Kantar.

Sales surged by 17.7% at the big four grocers and by 24.5% at Aldi and Lidl, which lost their title as the fastest-growing retailers for the first time in recent history as Iceland helped shoppers fill their freezers.

Convenience stores also benefited from the spike in demand as smaller branches of the major retailers and independently owned outlets increased their share of spend to 13.3% in the four-week period, with sales jumping 30% compared with a year ago.

Co-op, with its extensive number of convenience outlets, increased sales by 23.3%.

Fraser McKevitt, head of retail and consumer insight at Kantar, told The Grocer independent retailers were boosted as consumers flocked to any store with available stock as the big supermarkets struggled to maintain supply.

“People increased their frequency of shopping dramatically, particularly in the week commencing 16 March,” he said.

“On one hand they were trying to stock up, but they were also shopping around when they couldn’t get what they wanted in the supermarkets. And that benefited other stores, including independent retailers near to their houses.”

McKevitt expected growth at supermarkets to slow as consumers worked through stockpiled groceries and following the stricter lockdown by the prime minister, but he added indies would continue to outperform.

“Lots of people are combining their daily exercise with getting to the local shop, which is going to disproportionately benefit independent retailers,” he said. “For some people, the daily permitted trip out to buy some food might actually be a highlight of their day.

“Regular trips to smaller local stores are also likely to continue as people avoid travelling and the queues at bigger stores with one-in-one-out policies in place. Shoppers may still go to a traditional supermarket once a week to do a bigger shop, but are more likely to rely on smaller, local stores more frequently.”

Supermarket sales overall grew by the fastest rate in more than a decade during the past 12 weeks – increasing by 7.6%.