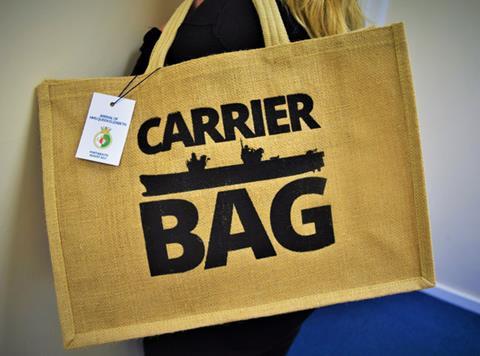 All proceeds from the £6 bags go to the RNRMC, which supports sailors, marines and their families throughout their lives

The society has started selling the hessian bags at 15 of its branches, including Portsmouth’s seafront location at The Hard, Bembridge, Hayling Island and Lee-on-Solent. They feature a design of the arrival of HMS Queen Elizabeth - a 65,000 tonne aircraft carrier - to Portsmouth last year, which also showcases Southern Co-op’s longstanding history with the naval community.

All proceeds from the £6 bags go to the RNRMC, which supports sailors, marines and their families throughout their lives.

“We are delighted to be selling these great bags in our stores,” said Lauren Harris, local marketing and insight manager at Southern Co-op. “Our society was founded by dockyard workers in Portsmouth back in 1873 and our head office is still based here along with many of our stores, so we really feel that there’s a strong link for us and our customers to the Royal Navy and Royal Marines. We’re thrilled to support this worthy charity in any way we can and we’re sure they will fly off the shelves.”

Alasdair Akass, director of fundraising and marketing at the RNRMC, added: “We’re incredibly grateful that Southern Co-op are now selling our iconic HMS Queen Elizabeth carrier bags. As a business with a rich maritime history, the co-op understands how important it is that we ensure the wellbeing of the naval community. I hope that customers will enjoy our stylish bags while shopping and know that their purchase is contributing to the well-being of our valued naval fleet.”

Since the introduction of the carrier bag levy in 2015, Southern Co-op has reduced carrier bag usage by 69%, and donates all proceeds from the 5p carrier bag charge. A spokeswoman for the society said it carries out these donations because it believes the “funds belong back in the communities that helped to raise them”.

Almost £5k was distributed back to communities from the carrier bag fund through its Love Your Neighbourhood scheme last year.