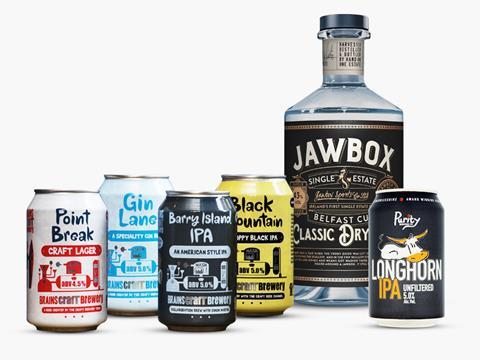 Asda plans to become the “biggest craft beer retailer in the UK” with the introduction of over 100 brews to its shelves as part of a major overhaul of its beer, wine and spirits (BWS) offer across its stores this month.

The range update, which officially rolls out on 24 May, would see up to 10% of its existing in-store space dedicated to craft beer, Asda said, having already added 40 new SKUs from the likes of Brains, BrewDog, Harbour Brewing Co, Innis & Gunn, Purity Brewing Co and Vocation since December 2016.

“We want to build the most credible range out of the major retailers through adding over 100 new lines including regional beers.”

Jawbox was already available in 150 M&S stores across the UK, as well as Sainsbury’s and Tesco stores in Northern Ireland. The deal to supply 500 Asda stores was “an important breakthrough”, said founder Gerry White.

Asda also revealed it had undertaken “one of the largest reviews of its wine to date”, reducing range duplication by 25% and introducing more premium bottles.

It follows in the footsteps of Tesco, which delisted a spate of Heineken products to make room for craft players in February, and Waitrose, which introduced 25 new craft beers to its shelves two weeks ago.

Asda doesn’t appear to have delisted any single brand as part of its overhaul, but it has steadily reduced the number of multipack and larger bottled beer and cider SKUs on its shelves since the end of 2016.

It follows a hike in prices across over 600 beer, wine and cider SKUs in Asda in March. At the time, the retailer said the price changes were down to its annual promotional cycle, but average prices remain 2% higher year on year across a comparable list of 1,566 BWS SKUs in stores [Brand View 52 w/e 9 May 2016].